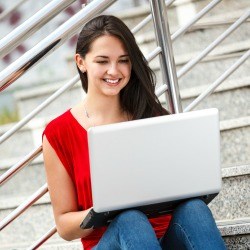 For many of us, the Internet has changed everything from how we find love to how we find the city's best cheeseburger. According to The Boston Globe, it has also revolutionized the way we learn. Now, through massive open online course (MOOC) providers like Coursera and edX, students can learn how to run an FDA-approved clinical trial or design an aircraft, all from the comfort of home and at little to no cost. The trade-off: MOOCs generally offer certificates of achievement rather than college credit or grades, limiting their practical benefit in the workplace. That might be changing.

The Wall Street Journal reports that the MOOC-provider Udacity recently announced its next venture called the Open Education Alliance. The OEA will allow students to earn free MOOC certificates through online courses developed with the input of several large companies. In other words, big employers like AT&T and Google are not just embracing MOOCs, but are actually helping design and fund them in an effort to produce more skill-ready candidates without mounds of student debt.

"The common denominator [among the new MOOC certification programs] is that there really is an interest in finding credentials that don't require a student to buy the entire degree," Sebastian Thrun, Stanford University computer science professor and Udacity co-founder, told The Wall Street Journal. "This is really democratizing education at its best."

The Open Education Alliance may be a clear signal that employers are warming up to MOOCs, but it is not the only one. The Journal notes that companies like Yahoo have begun reimbursing employees who complete low-cost, certified courses for the MOOC provider Coursera. Students who have successfully completed MOOCs are beginning to highlight them on their resumes and LinkedIn profiles, too, notes The Boston Globe, and human resource executives are taking notice. Though MOOCs are no substitute for a formal degree in jobs requiring them, they can indicate a candidate's commitment to upgrading their skills.

"Any initiative that candidates take to update their skill set, acquire new skills, or simply extend their knowledge base will be viewed as positive," Bruce Allen of the recruiting firm Point B Search told the Globe.

This is not to say that MOOCs can guarantee one a job, or that the enthusiasm for them will continue. According to Diverse: Issues in Higher Education, some research suggests that dropout rates for MOOCs are higher than in conventional courses. Proponents of traditional education who were initially unsure what to make of MOOCs are now beginning to question them publicly, and a recent poll suggests that many employers still prefer to hire candidates who attend brick-and-mortar institutions. MOOC advocates often admit that the expectations for MOOCs may have been too high initially, but caution against discounting them entirely.

"This whole thing is just a little over a year old," Anant Agarwal, MIT computer science professor and president of the MOOC provider edX, told Diverse: Issues in Higher Education. He compared the evolution of MOOCs to that of search engines, which took 25 years to become fully established. "We need to give it time. There's still a long way to go."