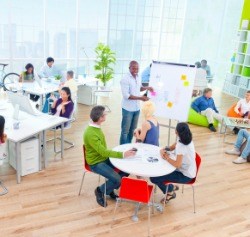 It is every company’s goal to come up with “the next big thing”. However, it is not always easy to spark such creativity. As a result, more companies are taking matters into their own hands and creating workspaces that encourage interaction and creative collaboration.

According to Forbes, research has shown that face-to-face interaction is the basis for successful collaboration and in many companies, regardless of size, getting people to interact with others outside of their department can be a challenge. As The Wall Street Journal reported, more companies are exploring ways to encourage face-to-face interaction. The idea is nothing new—for example, companies have long utilized open floor plans and central bathrooms. However, today the methods are much more elaborate.

To increase the likelihood of these face-to-face interactions, some companies such as Google and Facebook have taken a scientific approach to “serendipitous interactions,” noted NPR. Both companies hired experts to collect and analyze data to determine the best ways to connect people, then incorporated findings into an action plan. Examples of such efforts, noted The Wall Street Journal, include smaller spaces so that employees have more opportunities to bump into each other, trivia questions in “dead zones” such as elevators and overlapping areas to encourage workers to move around the office more often. NPR noted that Google has high school cafeteria-like tables so that employees can literally bump into each other in passing and then sit down to chat. And it does not stop there—even the cafeteria lines at Google have been analyzed to ensure that workers talk to others they do not work with on a daily basis.

Another example is Zappos, whose new Las Vegas headquarters will encourage its employees to interact with everyone, not just other Zappos employees. The company will close off a bridge that connects the parking garage and office building so that employees have to take a longer route to the office and mingle with pedestrians. The company will also open its lobby to allow visitors and employees from other companies to work in their space and interact with Zappos employees.

Despite the popularity of these approaches, particularly at tech companies, such architectural designs can be costly or may not be feasible in some buildings. As a result, The Wall Street Journal reported that NPR conducts “Serendipity Days” where groups of employees from different departments get together for a two-day brainstorming session to come up with new ideas and projects. At marketing agency CTP, employees swap desks and offices every summer.

Although Google and Facebook seem to be examples of success stories, it is difficult to know for sure whether these approaches are actually working or if the innovation stems from something else. As visiting scholar at New York University Greg Lindsay told The Wall Street Journal, “[Companies] compress people in the same space, put in a coffee machine and just hope that something good happens.”

“The Science of Serendipity in the Workplace,” online.wsj.com, April 30, 2013, Rachel Emma Silverman