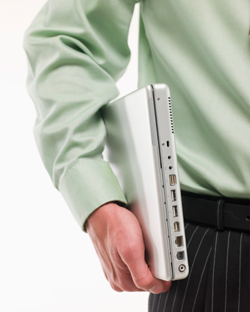 Companies who fail to embrace "bring your own device to work" policies (also called BYOC or Bring Your Own Computer) may find themselves left behind in a new era of technological advances. While several companies have allowed their employees to bring their own mobile devices to work for some time (including cell phones, smart phones and personal organizers), according to CBC News, the idea of extending that policy to include computers is rare.

CBC sites Kraft as one of the most recent companies to try out the new BYOC policy by providing their 97,000 employees with money to buy their own computers. It's proven successful so far with many employees demonstrating increased productivity when using their own chosen tools. All employees must buy the Microsoft Office suite, but any other necessary software runs on Kraft servers. Employers simply connect their machine to the network and can use whatever they need. To protect security, Kraft provides encryption, security software and guidelines on safe practices for installing software and visiting external websites.

As ZDNet points out, however, not all corporations approve of the BYOC policy. Columnist Erik Sherman argues that the concept is "so fraught with technical, operational, security, and legal risks that something is bound to happen." He cites the legal ambiguities over who owns the computer, how well companies can monitor it and potential security leaks. CNN Money, on the other hand, reports that CIOs have dealt with potential risks by using management software that can keep "personal and business data 100% separate, and consequently, secure."

In truth, company bans against putting corporate data on personal devices is usually impossible to enforce. So why have some companies been so reluctant to change? Well, most companies created their original IT management policies during the "mainframe or client-server era," according to CNN Money. Therefore, administrators felt the need to protect those expensive assets from all outsiders. Then came the PC and Internet eras, forcing IT restrictions to relax a bit even though they never quite relinquished their "command-and-control" framework. Now, a new era has arrived. The latest innovations tend to reach consumers before being adopted by workplaces, as proven by Apple's iPad.

The fact that some companies have begun changing their policies to adapt to this new era will most likely put pressure on the remaining companies who don't change. For instance, along with Kraft Foods, Carfax has offered its employees interest-free loans to purchase computers and Citrix Systems gives its employees $2,100 towards a computer. Other companies have taken smaller steps in the same direction, allowing employees to connect iPhones or Google Androids to corporate applications and/or paying employee's monthly cell phone or smartphone bills.

ZDNet considers the growing popularity of mobility and telecommuting as another factor pushing companies towards BYOC policies, since that trend has led to many people choosing laptops over desktops as their primary computer. Cloud computing also enables software and data to be run and stored on a central computer server rather than on individual PCs, making it even easier for corporations to try out a BYOC program. Those companies who stubbornly cling to antiquated policies, without giving BYOC a try, could consequently find themselves left with grumbling, unhappy employees. Times are changing and whether they like it or not corporations may have to change with them.

"Bring your own device to work is finally here," CNNMoney.com, September 1, 2010, Gary Kovacs