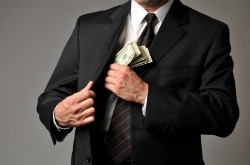 A recent survey by The Chronicle of Higher Education has found that total median compensation for public college heads grew by 3 percent in 2010-11.

Three heads of public colleges earned more than $1 million in total compensation during that time period: The highest paid president was E. Gordon Gee of Ohio State University, who earned $1,992,221 in total compensation, including a base pay of $814,156. Texas A&M Chancellor Michael McKinney earned $1.97 million, and former Pennsylvania State University President Graham Spanier -- who lost his job because of a sexual abuse scandal involving an assistant football coach -- earned $1.07 million.

As The New York Times pointed out, executive pay has become a heated issue in many states where state governments have drastically cut higher education funding.

"I don't think there's any question that on a lot of campuses facing budget cuts, there is a sense that the president is insulated from the experience," said Jack Stripling, a Chronicle reporter who was quoted by The Times.

The Chronicle noted that at Cal State, for example, there was a public outcry when Elliot Hirshman was named president of San Diego State University and given a salary of $400,000 -- a third higher than his predecessor had received. The situation was exacerbated by the fact that Hirshman's salary was announced on the same day Cal State trustees approved a 12 percent tuition hike. The board eventually adopted a policy capping the pay of incoming presidents 10 percent more than their predecessor's compensation. An amended policy that was adopted this month froze all salaries for incoming presidents at current levels, unless an increase of up to 10 percent could be financed by a campus foundation.

"There's no question there is an athletic arms race with colleges paying millions for football and basketball coaches, but there is very much of an academic arms race, too," remarked Richard Vedder, founder of the Center for College Affordability and Productivity, who was interviewed by the Pittsburgh Tribune-Review. "And I think students increasingly are funding the academic arms race through higher tuition and fees."

The Washington Post pointed out that top private university presidents still earn significantly more than public university leaders: According to another Chronicle survey, in 2009, the highest-paid leader at a private institution was William Brody, president of John Hopkins University, who earned $3.8 million.