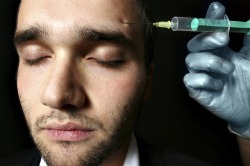 There's an overall increase in the number of guys having plastic surgery, partly due to older men believing that having cosmetic procedures will help them find - or keep - a job in today's competitive workforce.

The number of cosmetic procedures among men jumped by 2 percent from 2009 to 2010, according to new research from the American Society of Plastic Surgeons (ASPS), as reported by HealthDay.

For the same reporting period, the number of men getting facelifts increased 14 percent, while Botox procedures on males rose 9 percent and liposuction on men went up 7 percent, according to the ASPS data.

Cosmetic surgeons speculated that one factor that may be fueling the spike is the tight job market. Older men seem to believe that looking younger will give them the competitive edge they need, particularly at companies that have more of a laid-back casual culture. "I have guys telling me they're getting passed over for job promotions that are going to younger guys. I have others who are unemployed and are desperate to get back to work and ask, is there anything you can do to make me look younger?" Phil Haeck, M.D., a cosmetic surgeon and ASPS president, told BNET.

Haeck goes on to say that this new motivation for men going under the knife is unprecedented in the industry. "I get men out of work who want to look younger because they're competing with guys 20 years their junior for jobs. That's a very different attitude towards surgery than we've seen in the past," Haeck told ABC News.

Furthermore, the greater emphasis that men's magazines have on the latest fashion styles and health and beauty products for males is also helping to make male plastic surgery more culturally acceptable.

"I think there's a social change here," Haeck told ABC News. "I think it's just as acceptable for men to have plastic surgery. Every men's magazine focuses on looking fit and looking good."

Though initially hit hard by the recession, the plastic surgery sector is now bouncing back, with the total number of procedures up 5 percent in the past year and men comprising an increased proportion of both invasive and non-invasive practices. ABC News reported that in 2008, just eight percent of plastic surgery procedures were done on men; by 2010, however, that number went up to 13 percent.

In general, Haeck told BNET, men in their late 50s and 60s who are seeking cosmetic procedures are looking for facelifts, while those in their 40s and early 50s are asking for liposuction, Botox and fillers.

"More Men Are Having Plastic Surgery to Save their Jobs," BNET.com; March 21, 2011; Laurie Tarkan