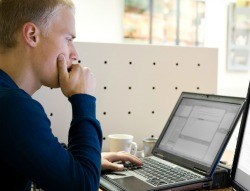 Students who graduated during the depths of the Great Recession faced uncommon challenges when it came to finding stable employment with fair wages. However, a growing body of research indicates that computer science and technology majors fared better than students in other fields.

A report released Tuesday by the U.S. Department of Education shows that college graduates with computer science degrees had a considerably lower rate of unemployment in 2012 compared to those with business degrees, Bloomberg Businessweek reported. And according to government data, computer science majors earned a lot more too, yielding a median income of $66,000 per year. Business majors, on the other hand, earned a median annual income of only $50,000 in 2012. The study noted that business grads also worked slightly longer hours when compared to computer science majors, with an average work week of 42.8 hours.

Anthony Carnevale, director and research professor of the Georgetown University Center on Education and the Workforce, blames the disparity on the fact that, in many cases, technology skills trump business skills for many employers.

"At the entry level, the technology skills just buy you more because it's so important [to companies]," Carnevale told Bloomberg Businessweek.

However, Carnevale also shared that his preliminary research shows that business majors catch up as they progress in their careers, often after earning an MBA or working their way up the corporate ladder. "The tech people are the engine, but the driver is the businessperson," said Carnevale. "When the businessperson becomes mid-career, they get their hands on the wheel."

Data recently released by the Department of Education's National Center for Education Statistics also showed high earnings and low rates of employment for graduates in the STEM fields of science, technology, engineering, and math. As Central Florida Future pointed out, the survey tracked 17,110 students who graduated in 2008 in order to compile the data.

According to the study's findings, over 95 percent of graduates who studied computer and information sciences reported having a full-time job with an average salary of $72,600. For the sake of comparison, the study also showed that graduates with a degree in the humanities brought in an average salary of $43,100 and reported working multiple jobs.

But all news for STEM graduates and computer science majors is not necessarily good news. According to Consumer Affairs, the vast majority of graduates in STEM fields may not actually be working in a STEM job. In fact, as Consumer Affairs pointed out, recent U.S. Census Bureau data that shows that 74 percent of those with a bachelor's degree in a STEM field are currently working in a different field.

"STEM graduates have relatively low unemployment, however these graduates are not necessarily employed in STEM occupations," Liana Christin Landivar, a sociologist in the Census Bureau's Industry and Occupation Statistics Branch, told Consumer Affairs.