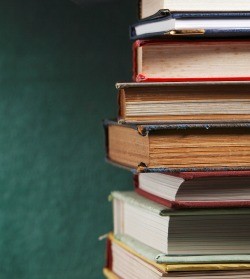 Rising student debt has been a hot topic as of late, putting tuition costs squarely in the spotlight. Often overlooked is the contribution textbooks and materials make toward college students' education debt, the cost of which has increased by more than 800 percent since 1978. Some members of the U.S. congress have taken notice, reports The Huffington Post, proposing legislation that could save students thousands of dollars over the course of their college careers.

Government data suggests the cost of college textbooks has increased by 812 percent since 1978, or three times the rate of inflation, and constitute a rapidly increasing share of student education costs. Sens. Dick Durbin (D-Ill.) and Al Franken (D-Minn.) have proposed a bill called the "Affordable College Textbook Act," which would create a grant program for colleges to create and expand free, open source libraries of textbooks online. A complementary bill was drafted in the House by Reps. Rubén Hinojosa (D-Texas) and George Miller (D-Calif.).

"Textbook costs are one of the most overlooked college expenses, but it can be substantial and a huge barrier that prevents many from attaining a college education," Hinojosa said in an editorial he penned for The Monitor. "Making high-quality open textbooks freely available to the general public would significantly lower college textbook costs and increase accessibility to higher education."

The concept of open-source textbooks is not novel. According to The Atlantic, Rice University already offers nearly a dozen free textbooks online through its OpenStax program, which it intends to expand. An open-education start-up called Boundless also offers digital textbooks. The ACTA would emulate these models to minimize or even eliminate textbook costs for many students.

"The dirty secret about textbooks is that they don't have to be so expensive given the rise of technology," Matthew Segal, co-founder of OurTime.org, which endorses the bill, told The Huffington Post. "Even worse, if you put textbook debt in larger context with student debt, the affordability of college is becoming less and less tenable, and, as a result, the American dream is becoming more difficult for the next generation to attain."

In addition to providing funds for colleges to create or expand their open source texbook offerings, the legislation calls for the U.S. Department of Education to draft a report for the Senate's education committee by mid-2016 that would detail how much open textbooks actually save students. By 2017, the Comptroller General would also be required to submit a report tracking how open textbooks impact the cost of traditional, paper-bound textbooks.