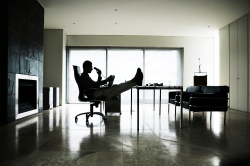 The House approved a bill that would require federal agencies to create policies that would encourage employees to telecommute.

The Washington Post reports that the legislation would require agencies to appoint a telework officer who would be responsible for creating policies and guidelines that would boost participation in a telework program. Such a program would allow employees to work from home or at approved telecommuting centers. Workers who handle secure or classified information would not be able to work outside of the office and the Government Accountability Office would be required to gather data to see if working from home hindered agency operation. Currently, just 10 percent of federal workers do their jobs from home.

The New York Times adds that the bill, which was Senate approved in May and passed by the House 290 to 131 on Wednesday, would set up more program guidelines. For example, it forbids telecommuting by workers caught viewing, exchanging or downloading pornography at work and employees with a history of poor attendance. Workers also would not be allowed to participate in union activities while working offsite. Cindy Auten, general manager of the Telework Exchange, a public-private partnership that advocates for more telecommuting, said the bill's new guidelines could help overcome obstacles to the practice.

Supporters of the measure argue it will save money by allowing agencies to reduce office space and electricity costs. Representative John Sarbanes (D-MD), who introduced the bill, believes that expanding telecommuting programs would equate to fewer commuters, less traffic congestion and, therefore, less emission of harmful gases. "I come from a district that has a very heavy footprint of the federal work force in it," he said. As a commuter himself, he added that the topic is of great interest to him. Colleen M. Kelley, president of The National Treasury Employees Union (NTEU), an organization that advocates for federal employees, agreed with Representative Sarbanes, saying, "Increasing federal telework saves gas, reduces road congestion and improves work-life balance."

Aaron Glover, telecommuting program manager for the Defense Information Systems Agency which implemented telework policies around 2001, told The New York Times that the policy paid off in February when Washington was hit by severe snowstorms. During this time, some 1,200 employees continued to work while other government offices shut down and lost days worth of money and productivity.

Opponents of the bill worry about decreased productivity. According to Auten, there is "cultural resistance from line managers. There's a certain fear that they'll lose control over their employees". The Washington Post reported that management is concerned because there is no effective way to measure offsite performance. Max Stier, president and chief executive at the Partnership for Public Service, a non-profit that focuses on federal workplace issues, noted that some managers "use physical presence as a proxy for working".

According to The New York Times, the Obama administration has expressed support and Representative Sarbanes believes Congress will have a bill ready for President Obama to sign before the August recess.