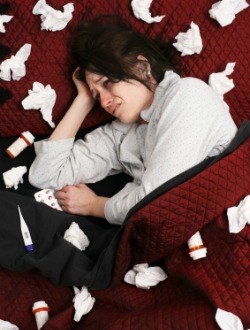 State legislators approved a bill on Saturday that makes Connecticut the first state in the nation to require employers to offer paid sick leave to their workers.

According to The New York Times, the bill, which the House voted 76 to 65 and was approved by the Senate on May 25, applies to service sector businesses with 50 or more employees who receive an hourly wage. However, manufacturing companies and nationally chartered nonprofit organizations, day laborers, independent contractors and temporary workers are exempt. Employees who qualify will be able to earn one hour of paid sick time for every 40 hours worked. The benefit is capped at five days per year. CNN reported that Governor Dannel Malloy is expected to sign the bill before it goes into effect at the beginning of 2012.

"This is a historic moment and a very common-sense moment," said House Speaker Christopher Donovan to CNN. "People get sick and there should be some way that they won't lose pay or lose their job if they get sick."

MSNBC reported that the United States is one of the few industrialized nations in the world that does not require paid sick time for workers. Vicki Shabo, director of the work and family program for the National Partnership for Women & Families, stated that more than 40 million U.S. workers do not have paid sick time. Liberia, Papua New Guinea and Swaziland also do not require it.

CNN noted that although no other state has such a mandate, San Francisco has required all employers to provide mandatory paid sick leave to workers since 2006. Washington D.C. and Milwaukee began mandating paid sick leave in 2008.

According to MSNBC, labor advocates hope that the passing of the bill in Connecticut will encourage other states to follow suit. Massachusetts is already considering a bill that would give workers seven paid sick days and other cities--including Philadelphia, Denver and Seattle--are looking into similar legislation.

Not everyone is on board with the legislation, however. Many businesses argue that the bill will significantly raise the cost of doing business and adds another obstacle for companies trying to stay afloat in today's tough economy.

However, according to CNN, Shabo pointed out that paid sick time is a public health issue and, in the grand scheme of things, is a huge benefit to everyone.

"The cost of providing a sick day is less than having a worker show up sick and not be productive and spread their flu or stomach virus to their co-workers or customers," argued Shabo. Furthermore, she added that most workers do not use up all of their sick time.

Despite some debate, Governor Malloy said he supports the bill.

"Why would you want to eat food from a sick restaurant cook? Or have your children taken care of by a sick day care worker? The simple answer is--you wouldn't. And now, you won't have to," he said in a statement quoted by The New York Times.