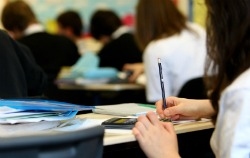 Connecticut legislators are proposing an innovative bill that would eliminate all state public college remedial programs by 2014.

The bill -- which is being called the first of its kind -- would replace remedial courses with regular credit-bearing classes that include "embedded" remedial support for those who need it. It would also require students whose test scores indicate that they are below college level to enroll in an intensive "college readiness" program before the start of their first semester. Currently, about 70 percent of students enrolled in Connecticut's 12 community colleges take at least one remedial class during their freshman year.

"We have kids who spend years in remedial classes, paying for a class every semester, not able to take any other classes, so it really slows completion," explained State Sen. Beth Bye, who introduced the bill and was quoted by the Hartford Courant. "In community college, so many things get in the way, so every semester, you delay [students], you're hurting their chances... Time is the enemy."

As noted by U.S. News & World Report, the vast majority of students who take remedial courses do not graduate: According to the Connecticut Board of Regents for Higher Education, only 13.5 percent of full-time degree-seeking students who took a remedial class in 2005 earned an associate degree within four years.

Moreover, research has found that many students who are required to take remedial classes would perform well by proceeding to regular college level courses.

But critics of the bill have said that eliminating remedial classes entirely is not a realistic plan. "We have students who are reading at the eighth- and ninth-grade levels, who are writing incomplete sentences [and] run-ons. They have essays that don't have any internal coherence, that don't have a main idea," said Thomas Hodgkin, an English professor at Northwest Community College, who was quoted by the Courant. "I'm not sure that can be remediated in one semester or even two semesters. I'll be honest with you, I think the legislators and the Board of Regents are a little naive about what students are actually capable of doing."

The bill, which was passed by the General Assembly's higher education committee last month, will likely be altered to satisfy its critics. As reported by Inside Higher Ed, a community college leader said that Sen. Bye would introduce changes to the bill this week that would allow colleges to offer one level of remedial courses, give faculty oversight of any resulting curricular changes and push off the deadline to 2016.

"There are going to be some significant changes to the legislation," said Gena Glickman, president of Manchester Community College, who was quoted by Inside Higher Ed. "They're reworking it."