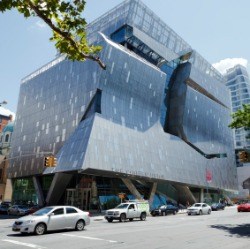 New York's Cooper Union for the Advancement of Science and Art finds itself in such financial distress that its board plans to vote next month on ending its 110-year-old tradition of offering all of its students free tuition (which amounts to $38,550 per student per year), The New York Times reported. The university's decision has met with strong opposition from students and faculty members alike, particularly in the wake of the recent construction of a new, $177 million academic building in Manhattan in 2009.

"There will be some tough decisions," said Dr. Jamshed Bharucha, Cooper Union's president, who landed his position after the building's construction. "There have to be because the model that has been in place cannot be sustained."

Cooper Union, which offers art, architecture and engineering programs, was founded by Peter Cooper in 1859 on the concept of free education for the working class. It admitted minorities and women when few other academic institutions did.

Currently, the university is losing $12 million a year, one-fifth of its overall budget. While critics blame the money drain on the new building, Bharucha says the financial problems began in the 1970s, when costs starting increasing faster than revenues. Also, before the economic downturn, Cooper secured a $175 million loan against the land it owns under the Chrysler Building, partly to invest in the stock market. Now, it's paying $10 million per year on that loan.

In April 2012, Cooper's board acted to eliminate free tuition for graduate students. Many students openly criticized this development, with eleven of these students barricading themselves in the school's clock tower for a week, refusing to come out until the school agreed to reverse its decision.

"We're not fighting for our own tuition," the group's spokeswoman, Victoria Sobel, told Gothamist in December. "We're fighting for future generations and for the model for sustainable higher education."

The administration decided not to take action against the eleven protestors, CBS in New York noted.

"Cooper Union has always been supportive of freedom of expression and peaceful demonstrations," said Jolene Travis, assistant director of communications. "We want to know and hear from the students."

Students are not alone in their opposition, The New York Times noted. Cooper's school of architecture formally stated that free undergraduate education was "an essential attribute" of the university. In a letter to Bharucha, the art faculty wrote they strongly opposed generating revenue from tuition. Alumni, too, have joined the fight, trying to find ways to raise money for the school and even discussing ways of landing a big donor to save the school from its present financial crisis.

Maguire Associates, a consulting firm Cooper hired, recommended limiting any reductions in scholarships to no more than 25 percent, arguing that students paying a high tuition would expect the costly amenities other schools offer. Peter Buckley, a historian and faculty member of the university, agreed with the firm, telling The New York Times, "What would we be if we started to charge tuition without a gym, without any services? […] Incoming students will expect more than we have."

"Free Tuition at Cooper Union May Be Near End," nytimes.com, February 15, 2013, Ariel Kaminer

"Report: Cooper Union To Vote On Whether To Charge Tuition To Most Students," newyork.cbslocal.com, February 16, 2013