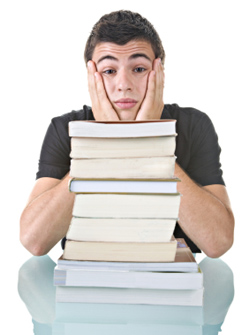 Spring break is supposed to be just that--a break, from the rigors of school, from the lectures, from the assignments. However, that is not always the case, particulary at Ivy League universities, noted The Huffington Post.

According to The Daily Pennsylvanian, a number of recent reports have focused on how stress levels are on the rise among undergraduate students. For instance, a University of California Los Angeles survey reported that the emotional health of freshmen across the nation is at an all-time low. Another article published by The Daily Pennsylvanian in February stated that the number of students seeking counseling on campus is at the highest it has been in the last decade.

As a student, stress is inevitable, but at some point everyone needs a little break. This is exactly why Cornell University's Faculty Senate voted to discourage professors from assigning homework over academic breaks. According to The Cornell Daily Sun, the Faculty Senate voted on March 9 to "strongly discourage" homework assignments over breaks. As a result, due to spring break several professors said they postponed assignments and changed syllabi to reduce students' workload.

As admirable as the proposal was, however, because it was not an outright ban, many Cornell students still found themselves working over spring break.

"I had a couple big assignments due the Monday I returned from break," said Beth Weed. "I spent a large part of my vacation on assignments and, in all honesty, it was really frustrating."

"My teacher never informed us of the resolution and assigned us a book to read over break. But she didn't assign it early enough in advance that I could have planned ahead," Itzkowitz said.

While The Huffington Post noted that most faculty members supported the resolution to discourage homework over breaks, some simply forget about upcoming breaks.

Cornell professor Ziad Fahmy, acknowledged that students work hard and deserve a break, reported The Cornell Sun, but added, "For faculty members, it is hard to understand because we tend to work during breaks, so it goes over our heads sometimes."

Despite some hiccups, students applauded the Faculty Senate for acknowledging the importance of academic breaks.

As Sarah Banks, a sophomore at the University of Pennsylvania, wrote in The Daily Pennsylvanian, "Although the proposal is not rock solid... it is still a step in the right direction."