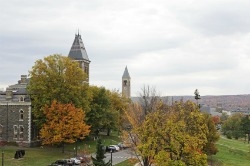 The announcement is expected to be made today at the NewYork-Presbyterian/Weill Cornell Medical Center by New York City Mayor Michael Bloomberg, according to the The New York Times.

Other universities in contention for the project included Columbia University, Carnegie Mellon and Stanford University. In all, there were 15 vying for the task of bringing the city an engineering school, expected to help aid in the creation of new companies and jobs, SFGate reported. However, Stanford University withdrew from the contest three days ago while Cornell University officials announced a $350 million gift in supplementation of their project proposal during the same time, The New York Times reported.

A New York City engineering school is expected to help increase the presence of Cornell University, located in Ithaca, N.Y., in the city, according to Ronald Ehrenberg, a Cornell economics professor.

"The trustees and the president have long wanted to have a bigger presence in New York City," Ehrenberg was quoted in SFGate as saying. "The notion that you can be a great international university in the 21st century if you're located in rural upstate New York doesn't work."

However, Cornell already has a presence in the area. Its medical school is located in the upper east side of Manhattan. Cornell's new plans, including a partnership with the Technion-Israel Institute of Technology, feature a campus of 2 million square feet on the city's Roosevelt Island. The campus would serve about 2,000 students, noted SFGate, and will include a modernistic and industry-focused venture, according to The Chronicle of Higher Education.

It had been assumed that Stanford, with its work with Silicon Valley businesses, was the front-runner in the competition, according to The Chronicle. Stanford had spent more than $1 million preparing a bid and had undertaken a visible campaign to help in developing support. However, The New York Times reported that city officials felt that Cornell University seemed fully behind their project while some of those from the Stanford team were not as wholehearted about their project.

"After several weeks of negotiations with New York City, university leaders and the Stanford Board of Trustees have determined that it would not be in the best interest of the university to continue to pursue the opportunity," a press release from Stanford University showed, according to The Chronicle.

To entice universities to bid for the project, Bloomberg's office offered free city land and $100 million in infrastructure improvements for project development, The Chronicle reported. In fact, the competition has been viewed as an attempt by Bloomberg, who is in his last term as New York City major, to build a type of Silicon Valley in NYC, the Columbia Spectator reported.

The announcement of the winning university came early, noted The New York Times. The official announcement was not expected until January. However, Cornell University officials appeared to be in a bit of a rush to get to work.

The school plans to have classes in operation in September 2012, a full year ahead of the time requested by the city.

"Cornell U. Is Winner of Competition for NYC Science Campus, As Stanford Pulls Out," chronicle.com, December 16, 2011, Goldie Blumenstyk