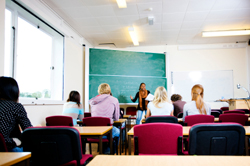 In his "state of the university" address, Cornell University President David Skorton announced that he plans to start a national campaign to advocate for the arts and humanities.

As the Chronicle Online pointed out, Skorton argued that arts and humanities not only teach students basic skills such as critical and contextual thinking, communication and ethics but also have value as disciplines of research and critical analysis. "At a very fundamental level, the arts and the humanities teaches us what it means to be human," he said.

In a Wall Street Journal blog post, Emily Noonan, a double major who studied business and Japanese pop culture, agreed. "My classes outside of the business school have provided frameworks and transferrable skills to complement the professional ones. I have learned to think, research, communicate, persuade, analyze, run, jump, and soar," she said.

Yet, according to The Cornell Sun, the humanities have been underfunded, at a national level, over the past 16 years.

The humanities are even undervalued outside the classroom, particularly in today's tough economy. According to a Wall Street Journal survey, engineering graduates earn significantly more than liberal arts majors.

Although Skorton acknowledged that quantifying the value of the humanities is difficult, he argued that university presidents need to advocate for more funding. "The need for investment in [the arts and humanities] is less intuitively obvious to many people than, say, investments to find cures for disease, or alternative sources of energy, or to alleviate poverty or malnutrition." However, he added, "now is the time for Cornell to step up and advocate nationally for the arts and humanities, as locally we recruit faculty that will define this university for a generation."

According to Inside Higher Ed, Skorton said he would start with "modest" goals such as stopping cuts in funding for federal cultural agencies, seeking money to make up for losses to inflation and seeking meaningful gains. However, he stated that it was most important to make a case on why the humanities needed more support on a national level. To illustrate, he cited current headlines that showed a lack of civility and values in society. "Watching the midterm elections, they seem nasty to me, not civil. The tragedy at Rutgers--isn't that a lack of civility and a lack of values?" Furthermore, he argued that critical thinking, which is taught in humanities, is essential when ethics problems arise in business and academic research.

Robert M. Berdahl, president of the Association of American Universities also showed concern over "the marginalization of non-scientific work" and agreed with Skorton's arguments. "If you look at what's happening to universities, they are trying to maintain the sciences and, in this downturn, to offer a justification for investment in the universities, and we have not made the case for the humanities as forcefully as we have for science," he said.

"Is a Liberal-Arts Education Worth It?" blogs.wsj.com, November 2, 2010, Emily Noonan

"Skorton: It's time to call for national support for humanities, and jumpstart faculty recruitment across university," news.cornell.edu, October 29, 2010, Susan Kelley