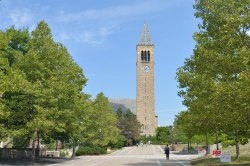 Cornell University gained a competitive edge in the athlete-recruiting game after an affluent alumnus and his wife donated $20 million to one of the school's financial aid programs to help attract more student-athletes.

The alumnus is Arthur Wolcott, who graduated from Cornell in 1949, and is a fan of Big Red football, according to The Cornell Daily Sun. ("Big Red" is the nickname associated with the university's sports teams.) Wolcott -- and his wife Audrey -- have been long-time supporters of Cornell's athletics, the Cornell Chronicle Online reported. In fact, Wolcott has served on both the school's Athletics Campaign Committee and Athletics Advisory Council.

"Athletics is important in building the Cornell University brand," Wolcott said in the Cornell Chronicle Online.

Wolcott is also the founder and Chairman of the Board of Seneca Foods Corp., which processes canned fruits and vegetables, and features brands like Aunt Nellie's, Libby's and Seneca. His donation will be used in the award match initiative, or AMI, program that started in 2011. This program allows the school to match the financial-aid packages offered to potential student-athletes from other Ivy League institutions as well as Duke, MIT and Stanford University.

Noel further explained in The Cornell Daily Sun, that in the past the school has missed out on a excellent students because of their family's financial situations. Wolcott's donation will hopefully prevent such a thing from happening again. The AMI program was created after a school survey showed that some students rejected Cornell to take advantage of more substantial financial-aid packages from other Ivy League schools, according to The Cornell Daily Sun, which also noted that the AMI package is available to all students, not just potential student-athletes.

Financial aid could make or break the deal for some students, particularly as athletes. Consider the case of Shonn Miller, a forward on the 2011-12 Cornell basketball team, who said he received some 20 scholarship offerings, and then got an unforgettable deal from Cornell, reports The Ithaca Independent.

"But when [the school] said I could come to Cornell for $2,000 a year, it made the decision pretty easy," Miller told The Ithaca Independent. "I mean, are you kidding me?"

Wolcott said his donation is a first step in helping boost financial aid offerings at the school, but that additional money will be needed.

"This is just the beginning," he said in the Cornell Chronicle Online. "...Others are going to have to step up and support it, too, if they want Cornell to have a fighting chance against our peers."