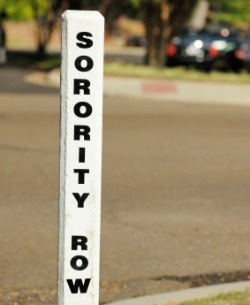 For many college sororities and fraternities, hazing new pledges is a sacred rite of passage. It has also been the subject of recent public ire, reports The Huffington Post, especially since at least two high-profile student deaths in 2011 were attributed to the practice. Schools have strict zero tolerance policies regarding hazing, but the practice continues, and just last week one victim published an article detailing her pledging experience. Her expose has garnered a lot of attention, not because of its brutal context, but because it suggests that in the end, it "was weirdly worth it."

Tess Koman is a sister of the Union College Beta Xi chapter of Sigma Delta Tau who detailed her experience with hazing in a recent Cosmopolitan article. She recalls what it was like being forced to share a single toilet with 42 other girls, or being locked in a basement for hours with very little sleep. She discusses "line-ups" in which pledges were forced to stand alone in a spotlight wearing all white, sans makeup, to be degraded and humiliated. One night she was forced to dance "to absurdly sexual songs" for all the fraternities on campus.

"I felt ashamed and a little gross," recalled Koman. "But I knew it was what I'd have to do if I wanted to become a sister in my chosen sorority."

Koman says that by the end of pledging, she was mentally and physically exhausted -- as were the plethora other pledges who were reporting to the school's counseling center in droves -- but that there was a benefit to the "trauma." Among them: Deep, lifelong friendships and all the social perks that go along with being a part of Greek life. "Pledging and getting hazed is horrible. But there's a reason it's not going anywhere any time soon," she said. She even went on to haze new pledges herself.

Koman's article quickly gained traction on Twitter and other social media outlets, reports The Huffington Post. Some readers suggested the piece condoned the abuse. One reader named Jen Nelson called the article "appalling" on Cosmo's Facebook page. "I can't believe Cosmo endorses women humiliating and degrading each other," she wrote.

The article has attracted other attention, too. According to Concordiensis, Union College's student newspaper, Union College and New York State law strictly prohibit hazing in all forms. As such, both the school and the Sigma Delta Tau National Headquarters are investigating Koman's claims, though Dean of Students Stephen Leavitt said it is a challenge since many of the women Koman spoke of have since graduated.

Nonetheless, Leavitt said he thinks the situation will be a major setback for the Greek community since it has "reinforced all of the stereotypes about hazing and sororities." He said he hopes sororities and fraternities will "redouble their efforts" to improve their image and cease all hazing.

"I think the Greek men and women have to take seriously the point that any hazing interferes with their mission," he said.

"Confession: Why Getting Hazed by my Sorority Was Weirdly Worth It," cosmopolitan.com, September 19, 2013, Tess Koman