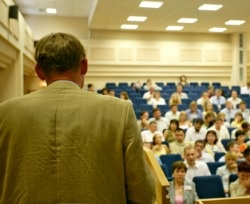 With California serving as a kind of testing ground for online education, traditional colleges and massive open online course (MOOC) providers are now trying to figure out how to work together without stepping on each other's toes. Now one institution's faculty union has raised a new concern: Who really owns MOOC content?

Inside Higher Ed reports that the faculty union at the University of California at Santa Cruz has raised concerns over whether faculty teaching courses through the MOOC provider Coursera can truly maintain ownership of their materials and also if the side contracts that come from such deals might affect the union's collective bargaining rights down the road. While Santa Cruz is the only UC campus with a tenure-track faculty union, according to IHE, the issues raised by the Santa Cruz Faculty Association have much broader implications.

Twelve years ago, SCFA lobbied for a California law ensuring that faculty would maintain intellectual property rights to all of their class materials. But before UCSC professors can sign on to teach Coursera courses, the university asks them to waive that right. According to a March 5 letter from UCSC professor and union rep Shelly Errington to senior university labor relations official Renée Mayne, professors worry these waivers will "irrevocably grant the university the absolute right and permission to use" their materials.

"These issues were not discussed with the [union], the exclusive bargaining unit for the UCSC faculty, prior to the signing of the contract between Coursera and [Santa Cruz]," Errington wrote.

The SCFA is not alone in its trepidation. Bob Samuels, president of the University Council-American Federation of Teachers, told Inside Higher Ed he is concerned that MOOC participation among a few professors might undermine all professors' rights.

UC Santa Cruz contends that the issue is moot. Mayne wrote in a letter to the SCFA last week that while she understands professors' concerns, those who turn over their intellectual property do so on a "strictly voluntary" basis and thus do not impact collective bargaining.

Some SCFA-member professors are inclined to agree. Professor emeritus Peter Kenez, who is one of four UCSC professors slated to teach a Coursera course this year, told Inside Higher Ed that he welcomes the opportunity to share his class on the Holocaust with a broad audience. "I willingly give this value to anybody who wants [it]," he said. "I like to be listened to."

As for Coursera, co-founder Daphne Koller said in a statement reported by Inside Higher Ed that the issue rests squarely between faculty and administrators. "Coursera is always happy to revise elements of the contract, if such changes better reflect university policies and are to the benefit of universities and professors."