Creative Job Titles: Are They Good Or Bad? 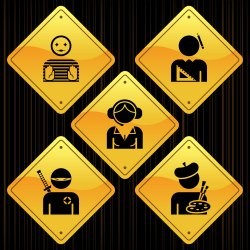 Who would have thought that being a ninja could actually help you stand out? According to UK-based recruitment consultancy IntaPeople, playful creative job titles such as "Accounting Ninja" and "Digital Overlord" are popping up more and more online.

"We are seeing more and more of these kind of job titles cropping up on online profiles, CVs and business cards," said Stephen Riley, director at IntaPeople, in a press release. "Many feel that casting away conventional titles will help them broadcast their individuality and give them a real edge over their competitors."

As reported by Silicon Republic, IntaPeople combed through thousands of online profiles to find the most unusual job titles. Among the top five were "Digital Overlord," "Creator of Happiness," "Retail Jedi," "Wizard of Light Bulb Moments" and "Dream Alchemist". Accounting Ninja was eighth on the list.

Such unorthodox job titles are mostly found on professional online profiles, such as LinkedIn, but the trend most likely stems from the rise of social media in general. As Riley explained, "Social networking sites such as Facebook and Twitter have shown that there is real value in bringing more personality to business, and creative job titles offer individuals another way of doing this."

Last November, Brazen Careerist had reported on the trend, noting that quirky job titles were appearing on more business cards. Seth Goldman, president of Honest Tea, for example, sports the title "TeaEO" on his business card and bio.

"I thought, if I'm responsible for the tea, and the tea is the most important thing, then let's make my title TeaEO," he said to Brazen Careerist. "It was also a fun way to let people know we weren't taking ourselves too seriously and weren't going to be constrained by the standard corporate approach to business."

Joanna Pineda, CEO and Chief Troublemaker of web solutions company Matrix Group added that fun titles say a lot about a company's culture and about the role itself to jobseekers.

The attention, however, may not always be positive. While these new titles may sound cool and impressive to friends, applicants and some employers, others may not find the creativeness so amusing. Riley warned that playful titles may cause some to question that person's professionalism, which may result in a missed business opportunity.

"It can be a risky tactic... Calling yourself a 'Wizard' or a 'Jedi' could be just a step too far for some," he said in the press release.

"The 10 strangest job titles on LinkedIn," siliconrepublic.com, May 2, 2012, Elaine Burke

"Why Witty Job Titles Are All the Rage," blog.brazencareerist.com, November 21, 2011, Lacey Mason