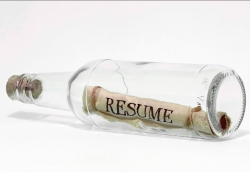 A competitive job market and the rise of social media have made non-traditional resumes more common as applicants try to stand out from the crowd. The Wall Street Journal reported that, according to CEB, companies received an average of 383 applications for every job opening they advertised in 2013 so it makes sense that job seekers would want to try new tactics in order to get noticed. For some employers, however, these creative approaches are usually nothing more than an intriguing gimmick.

Business Insider recently showcased 16 of the most creative resumes, some of which have gone viral on the Internet and a few that have landed applicants the job. As The Wall Street Journal pointed out, though, while these non-traditional resumes succeed in grabbing a recruiter's attention, most of the time they end up being just a good laugh. Bobby Gormsen, senior recruiting manager at Etsy, told The Wall Street Journal that in his experience, most creative resumes lack the hard skills that he is looking for in a candidate. Gormsen has seen some interesting out of the box applications, including an embroidered cover letter, a potholder resume and an application in a corked bottle. Gormsen admitted that the applicants got "points for creativity" but added, "it only tells one side of the story. We have a set of hard skills an applicant has to meet."

John Fleischauer, Talent Attraction Manager at Halogen Software, agreed. Fleischauer told CityTownInfo about an applicant who submitted a PowerPoint presentation that walked through the person's career in a story-like format. Fleischauer was intrigued so gave the applicant a shot.

"I felt like the person deserved an initial phone screening at the very least," he said.

Though the candidate was able to make it through the phone screening stage, they did not get the job.

"I think this example goes to show that bells and whistles do get attention but ultimately what I'm looking for is strong content, clearly articulated accomplishments and a unique value proposition," explained Fleischauer. "I want candidates to tell me why I need to hire them… a sexy resume might get you noticed but it's not what will get you the job in the end."

TheLadders noted that when using a creative resume, it is important to cater to your audience and remember that you are still submitting a business document. Indeed, Amanda Augustine, Job Search Expert at TheLadders advised, "Before you decide to opt for a non-traditional resume, know your audience. If you're working in a creative field, there's a little more license to get creative with your application materials." Augustine also noted, however, that a creative resume should not take the place of a traditional document.

"You still need a version that can easily be uploaded and parsed to any job board or corporate employment page that uses an applicant tracking software system," said Augustine.

Haley Cousins, recruiter for national sales and marketing recruiting firm Naviga Business Services, agreed that it is acceptable to submit creative resumes for certain roles, but added, "One caveat is that applicants shouldn't alter the resume to the point that it becomes distracting from the information on the resume."

For some recruiters, however, a non-traditional resume is an immediate red flag, especially when it comes to traditional jobs.

"Non-traditional resumes, for non-traditional jobs are all fine and good, but if you are looking for a traditional job, they are always counterproductive," said Bruce A. Hurwitz, Ph.D., author of Success! As Employee or Entrepreneur and President and CEO of Hurwitz Strategic Staffing, Ltd. who has also been an executive recruiter and career counselor for many years. "…I have never submitted a candidate to any of my clients unless they had a traditional resume. I need facts, not cute."

Creative or traditional, Augustine offered some words of wisdom when it comes to resumes: "At the end of the day, your resume should tell a story that demonstrates why you are qualified for and excited about a particular field or position."