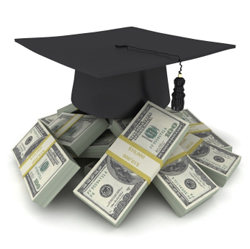 The California State University (CSU) governing board approved a two-step tuition increase of 15 percent, which they said will go towards increasing enrollment and classes for CSU students.

According to the Los Angeles Times, tuition for all students will increase five percent for the remainder of this school year. Next year, students will see an additional ten percent increase, bringing full-time undergraduate tuition to $4,884, plus campus fees that average about $1,000.

SF Gate reported that undergraduate tuition has been steadily rising. In the 2001-02 school year, tuition was $1,428. Currently, tuition stands at $4,230.

CSU trustees argued that the tuition hikes were necessary to maintain a high quality of education within the system. Furthermore, they said the additional money would help make up for reduced state funding, allowing campuses to add classes and increase enrollment. "This is a time of a hyper-competitive global economy where we need to have more students have access to higher education," said CSU trustee and state Superintendent of Public Instruction Jack O'Connell to the Los Angeles Times. "This motion will allow 30,000 more students to have access to college, it will add more courses and more convenient times. A four-year degree will mean a four-year degree."

Many students, however, disagreed. "They say they're being affected by budget cuts and the recession, but they're also passing down the burden to those of us affected by the recession," said Ruben Vazquez, a senior at Cal Poly Pomona. Vazquez argued that the tuition hikes will cause him and many other students to take out additional loans or defer their educations.

Osvaldo Ortiz, a junior at Cal State Northridge, said despite years of tuition hikes, he still has not seen an increase in classes or enrollment. This semester, he was unable to get into any of the political science courses he needed. "My four-year education plan will probably turn into a five- or six-year plan," he said.

Students were not the only ones who opposed the increases. Douglas Domingo-Foraste, a Cal State Long Beach classics professor, said, "So many students and their families work two or three jobs to be able to afford college... When a student can't take a class because they're having to work more, you're providing less access."

According to The Daily Californian, the University of California (UC) system is also considering raising tuition. UC President Mark Yudof proposed raising tuition by eight percent, bringing fees to $11,124--more than twice the amount in 2003. However, unlike CSU, the UC would also provide an extension on financial aid that would cover all fees for families making less than $80,000 as well as protect families making under $120,000 from the increase for the first year. The UC Board of Regents is scheduled to meet and vote on the proposal next week at UC San Francisco.