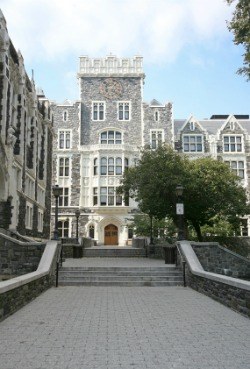 The City University of New York wants to make it easier for students to transfer from the system's two-year institutions to bachelor's degree programs.

As reported by Inside Higher Ed Quick Takes, CUNY's Board of Trustees unanimously approved a new transfer policy to streamline the current labyrinth that is the transfer process. The new policy creates a 42-credit general education framework, which consists of a 30-credit "Common Core" for all campuses and 12 "College Option" credits that are to be specified by each four-year campus. A CUNY press release noted that currently, general education requirements vary by campus--students may be required to take anywhere from 39 to 63 credits; on average, campuses require 51 credits. The new policy will also create easier pathways for its largest majors and make all CUNY college electives transferrable to any other CUNY campus.

According to The Chronicle of Higher Education, the new transfer policy was proposed by university officials after a University Office of Academic Affairs report showed that students were taking too many credits that did not transfer. In order to graduate, CUNY students need 120 credits; however, many end up taking more than that when transferring because coursework often does not transfer to their receiving campus. The report noted that such inefficiency costs the system and students $73 million a year.

Indeed, the press release cited many examples in which the current CUNY transfer process acted as a barrier to students' graduation goals. Gregory Bradford, vice chair of the CUNY Coalition for Students with Disabilities, for instance, transferred from York College to Borough of Manhattan Community College and finally Brooklyn College. Bradford said that because there was no way of knowing which credits would be accepted by the receiving college, "academic advisement [was] uncertain and ultimately forced [him] to spend an extra semester in order to graduate." Other students, or relatives of students, shared similar stories.

The Chronicle of Higher Education noted that, Benno C. Schmidt Jr., chair of the Board of Trustees, supported the policy because, in addition to helping students, it also created a common identity across its 23 campuses.

Several faculty members, however, opposed the resolution. They argued that it would undermine faculty's ability to determine curriculum and would negatively affect academic standards. Sandi E. Cooper, chair of the faculty senate, acknowledged that changes needed to be made, but argued that faculty did not have enough say in the process.

According to the press release, the changes will take effect in fall 2013. The university plans to review and evaluate the policies and the Common Core each year for the first three years, and then every three years after that, making modifications as needed.