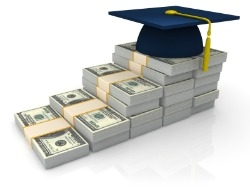 Education budgeting woes have been drawing protests from students and faculty across the nation and this week's hot zone is New York City.

City University of New York trustees voted 15-1 in favor of a controversial tuition hike on Monday despite the mass of protesters gathered outside Baruch College in Manhattan. According to The New York Times, the plan will enact a series of $300 annual tuition increases through 2015, bringing annual tuition at CUNY's four-year colleges to $6,330 in 2015-16. That represents a 31 percent increase over five years.

Hundreds of students from the school took to the streets in protest, waving banners and chanting "Fight! Fight! Fight! Education is a right," and "Abolish the board of trustees," while NYPD officers looked on from behind barricades. The protests were much more peaceful than last week when students scuffled with university security and police, according to CBS New York. Classes were cancelled Monday to prevent a repeat of last week's incident.

Board members insist the hikes are necessary to offset deep budget cuts and increasing enrollment. Chancellor Michael Goldstein noted in the Times that the increases will help to protect faculty and staff from lay-offs that similar institutions have undergone in recent years.

Despite the increases, the New York Daily News reported that current CUNY undergraduate tuition is low compared to other schools--about $5,100 compared with a $8,240 average for public colleges nationally.

"What we approved today was a modest and predictable tuition increase," CUNY Senior Vice Chancellor Jay Hershenson, was quoted as saying in The New York Times.

Still, students protesters insist any increase is simply too much.

"For a lot of students, this series of tuition hikes is going to be something that either pushes them out of college or pushes them into debt once they finish college, neither of which is good for our city," Carwil Bjork-James, a graduate student and adjunct professor, told CBS New York.

Part of the controversy stems from CUNY's reputation for affordability, serving lower income and minority students who are unable to afford education elsewhere. In fact, CUNY did not charge tuition at all until the 1970s, noted The New York times.

Bill Crain, a psychology professor at City College, defended this tradition and was quickly removed by campus security, according to the New York Daily News.

Many demonstrators also called out the disconnect between the highly-paid administrators and the low income students who attend CUNY. Public records indicated, for example, that Goldstein alone earned more than $560,000 in total compensation last year, reported the New York Daily News.

"The board of trustees are mostly successful business people, and they're basically trying to run a public institution as a business, which it is not," student Jamie Yancovitz told The New York Times. "They don't get what it's like for us."

"Amid Protests by Students and Others, CUNY Trustees Vote to Raise Tuition," nytimes.com, November 29, 2011, Richard Perez-Pena

"Student outrage at CUNY over $300 tuition hike, as hundreds march on Baruch ahead of trustee vote," nydailynews.com, November 28, 2011, Edgar Sandoval and Corky Siemaszko