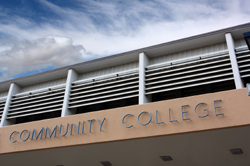 The City University of New York Board of Trustees recently approved the establishment of a new community college for New York City, reported The Chronicle of Higher Education.

According to CUNY Newswire, plans for the new college--appropriately named New Community College--began in the spring of 2008 to address rapid growth in student enrollment at CUNY's six community colleges. As the New York Post pointed out, in the last decade CUNY has seen enrollment jump by 43 percent. Additionally, the new college was established to improve graduation rates and better prepare students for further education and the city's workforce needs.

"Our students are low-income, first-generation students and they and their family members want them to get jobs," explained founding president Scott E. Evenbeck, former dean of University College at Indiana University-Purdue University at Indianapolis. "We want students to be able to get jobs--because those two-year degrees help build the economy here in New York City--and we want them to go on for four-year degrees."

Located in Manhattan, overlooking Bryant Park, New Community College will open in Fall 2012 with 500 students, but is expected to eventually serve some 3,000 students. It is the first new community college the city has opened in more than 40 years, reported CUNY Newswire. With the goal of improving graduation rates, the school will introduce a number of initiatives, including requiring all freshmen students to be full-time and a common curriculum for all first year students that will incorporate a better understanding of the work world. Furthermore, students who need remedial instruction will simultaneously take credit-bearing academic work.

CUNY Trustees have already approved the first eight degree programs--Associate in Arts degrees in Business Administration, Human Services, Liberal Arts and Sciences and Urban Studies; Associate in Applied Science degrees in Energy Services Management, Health Information Technology and Information Technology; and an Associate in Science degree in Environmental Science. All majors are in fields with available jobs and have a path towards a bachelor's degree. Each program is designed to prepare graduates for employment in private, non-profit and government organizations.

"It's a great opportunity to start a college from scratch and to really build a new kind of experience for students that will hopefully make them more successful," said Katherine Hughes, assistant director of the Community College Research Center at Columbia's Teachers College, to the New York Post. "I think people all over the country will be watching this."

According to the New York Post, New Community College will have the same admission requirements as CUNY's other colleges and will cost about the same amount. Currently, it would cost a student $3,300 per year to attend CUNY, but that price tag is likely to increase.