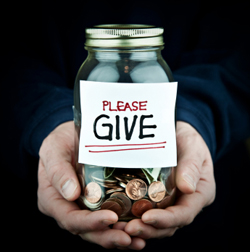 Positive recognition for donations has long been a tactic to encourage giving. However, according to The Washington Post, student volunteers at Dartmouth College and Cornell University decided to try something new: they created a list of seniors who had not contributed to the class gift and used peer pressure to get them to donate.

The Chronicle of Higher Education reported that Dartmouth created a senior-gift campaign to boost donations from young alumni. Instead of asking graduating seniors to make a pledge that they could pay off after leaving the campus, the schools sought donations before students left, hoping that it would also spark an interest in future gifts. "When [students] were all located in one central spot and were most receptive to the message, we weren't capitalizing on that," said Nariah Broadus, former associate director of the Dartmouth College Fund.

This year, to further boost donations, the Class of 1960 promised to give $100,000 if the entire graduating senior class participated. To meet the goal, volunteers were encouraged to reach out for donations via instant messages, emails, phone calls and in-person visits.

In the final 24 hours, just 24 of the 1,123 seniors had not donated. One volunteer emailed a list of those students' names and students, some of whom were not volunteers, reached out to the remaining 24.

One student, Laura DeLorenzo decided not to give in to peer pressure and was criticized in the school's newspaper. Her name and photo was also publicized on the Little Green Blog, a popular Dartmouth student site.

DeLorenzo argued that giving money is a personal choice and said she resented the pressure she received from other students. Her response, which was also posted on the Little Green Blog, drew comments from students and alumni, some of whom questioned the sincerity of donations when pressure tactics, such as those applied to DeLorenzo, are used.

Meanwhile, Cornell's senior gift program experienced something very similar. According to The New York Times, Erica Weitzner was pressured by her own sorority through multiple phone calls and emails from sorority sisters once they found out she was the only person who had not given to the class campaign. "I understand the theory behind the Cornell campaign is they want their seniors to donate, but pushing this hard makes it seem like it's no longer a donation but more like part of tuition," she said.

Although student volunteers had good intentions, some argued that they lost sight of the big picture. "The goal is not to raise money, but to begin a pattern of behavior," said Rob Henry, executive director of emerging constituencies for the Council for Advancement and Support of Education, to The Chronicle of Higher Education. He explained that schools should make students feel good about giving and that pressure tactics simply result in "shoo gifts" to stop the pestering.

Furthermore, he stated that the best way to instill a habit of giving is positive recognition in the biggest forum possible, such as graduation. When a student walks across the stage to receive his or her diploma, the college should announce that the student donated to the senior class gift. "That's serious recognition, not only for you, but for your parents sitting in the audience," he said.