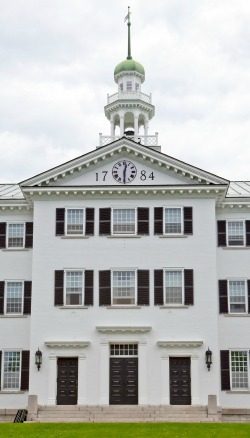 Dartmouth College canceled class yesterday for the first time since 2007, The Dartmouth reported. Administrators' decision to not hold class on Wednesday, April 24, came after a student protest during a welcome show for prospective Dartmouth students.

The "Dimensions" show, as the event is called, is a Dartmouth tradition and is meant to be a celebration of the school's culture for admitted students. The protesters interrupted the event on Friday, speaking out against racism, homophobia, and underreported sexual assault on campus. CNN stated that following the protest, a number of offensive and threatening comments were posted on BoredAtBaker.com, a forum for Dartmouth students. Posts included sexist and racist comments in addition to threats of sexual assault and violence targeting the protesters.

According to The Dartmouth, the protesters brought these threats and remarks to the administration's attention via a letter calling for a "day of campus-wide reflection" instead of classes. A meeting involving administrators, faculty, and protesters was subsequently held. During the meeting, faculty members and administrators read aloud some of the derogatory comments on Bored at Baker. "The protesters said that they felt unsafe and endangered," Michael Bronski, women and gender studies professor at Dartmouth, noted. "They said that they were targeted by name for rape and assault at Bored at Baker." As Ivy Schweitzer, chair of the women and gender studies department, pointed out, because the forum is anonymous, the people who posted the comments under scrutiny could not be tracked.

Not everyone, however, is concerned with the posts on Bored at Baker. Some students stated that the website is meant to be a forum for outlandish conversation. Tyler Crowe, a student at Dartmouth, said he "would never take anything seriously on Bored at Baker."

Despite skepticism regarding the seriousness of the posts, Dean of Faculty Michael Mastanduno and Interim President Carol Folt ultimately decided to cancel all undergraduate and graduate arts and sciences classes in favor of programming intended for members of the Dartmouth community "to discuss Dartmouth's commitment to fostering debate that promotes respect for individuals, civil and engaged discourse and the value of diverse opinions," stated the email notifying everyone of the decision. As per CNN, the email went on to say that "it is necessary for the community as a whole to learn about all that has transpired and to discuss further action that will help us live up to our mission."

Programming included a facilitated discussion with a social justice and diversity consultant, a community gathering, a faculty meeting, and "teach-ins" with faculty and staff.

The Dartmouth noted that the college last canceled classes in February 2007 because of blizzard conditions. The most recent event of canceled classes at the school due to campus tumult was in 1986 after students destroyed an anti-apartheid campus symbol.

Response to the decision to cancel classes yesterday was not entirely met with accord. Several students and faculty members opposed the timing. Thomas Cormen, a computer science professor at the university, expressed his concerns, stating, "We have courses that are run on a very tight schedule. Canceling a class has all sorts of ramifications down the line." Mon Yuck Yu, a student at Dartmouth, stated that considering the number of scheduled exams, she was surprised that the administration canceled classes on short notice. Others hypothesized that the event would be unsuccessful, since a significant number of the campus would probably choose not to take part.

While not in opposition to the alternative programming, Nicholas Duva and J.P. Harrington communicated in The Dartmouth Review that while dealing with the situation at hand, the administration overlooked the severity of the protesters' actions. First, following the protesters' interruption of the Dimensions show, many prospective students likely decided against attending Dartmouth. Second, the demonstrators violated the university's code of conduct, which bans "conduct (including by way of example, obstruction, noise, or the display of banners or objects) that prevents or disrupts the effective carrying out of a College function or approved activity, such as classes, lectures, meetings, interviews, ceremonies, and public events." However, the protesters have not yet been held accountable for their actions.

Despite their disagreement with why the alternative programming was scheduled, Duva and Harrington encouraged the student body to participate in the campus events: "Protect what's great about Dartmouth and, at the same time, join the discussion about how to improve it and restore peace to the campus."