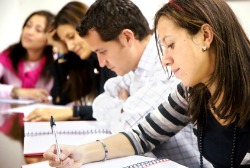 A record number of high school graduates passed the Advanced Placement exams in 2010, but a greater percentage also scored at the lowest level possible.

The senior high school class of 2010 scored a "1," the lowest possible, on 23 percent of the AP exams they took, The Wall Street Journal reported. A decade ago, the number stood at 14 percent, according to national data released by the College Board, the nonprofit group that gives the tests as well as the SAT. With tests being scored on a 1-5 scale, the vast majority of colleges offer credit to high school students who earn a score of "3" or higher.

More than 850,000 high school seniors in May's graduating class took at least one AP test, almost double the number who did so ten years ago. However, they failed nearly 56 percent of all exams they took, compared to a 39 percent failure rate in 2001.

Students tended to do poorly on exams in math and the sciences. Students in the 2010 graduating class earned the lowest possible score on 37 percent of the biology exams taken and 34 percent of the Calculus AB exams.

Education officials blame the low scores on efforts to push more students--who are often inadequately prepared--to take AP courses in preparation for studies at the college level. Furthermore, they say school districts have lowered the rigor of AP curriculum to accommodate lower-performing students and students who enroll to bolster their college applications.

In addition, more minority high school students are succeeding on AP exams, but they are still underrepresented in those high achieving classes, The New York Times reported.

However, the gap between how minority students, compared to non-minority students, is still wide in most regions across the nation. For instance, African Americans represented 14.6 percent of the total high school graduating class last year, but made up less than 4 percent of the AP cohort who received a score of "3" or better on at least one exam.

Certain states performed substantially better than others in matriculating students who earned high scores on AP tests, a press release noted. Maryland, for example, led the nation for the third straight year with the highest percentage of students succeeding on exams. In the College Board's analysis of the exam results, experts offered advice to high school districts to improve student performance.

"The College Board Announces AP Results for Class of 2010: Number of Students Succeeding on AP Exams Has Nearly Doubled Over the Past Decade," multivu.prnewswire.com, February 9, 2011