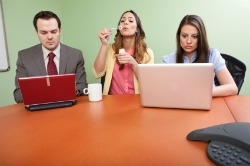 If you squandered a good deal of your Monday scouring online celebrity rags or tweaking your virtual NCAA bracket, you might be a "cyberloafer." You are in good company, though.

CBC News reported that a study titled "Lost Sleep and Cyberloafing", which is to be printed in the "Journal of Applied Psychology", spotlights workers' tendency to wile away their time online when they did not catch enough shut-eye the night before. According to the study, this tendency is referred to as cyberloafing, a "specific form of loafing behavior in which employees spend work hours and company Internet access to check personal emails or visit websites not related to their work."

As reported by Penn State Live, the study -- led by researchers at Penn State, the Singapore Management University, Virginia Tech and National University -- asked sleep-deprived subjects to watch a boring lecture, then monitored how much time participants spent browsing unrelated sites instead. The results: subjects spent about 20 percent of their time surfing the web.

The Washington Post noted that the researchers found workers' had a tendency to exercise poorer self-control due to tired peaks the Monday following daylight savings time -- a time when the average person loses about 40 minutes of sleep. Frequent sleep interruptions also have the same effect as sleep time lost from DST -- subjects squandered away an average of 8.4 minutes for every hour of interrupted sleep the night before.

While a few minutes of cyberloafing here or there might not seem like a big deal, a press release from the Singapore Management University noted that one-third of the world participates in some form of daylight savings time.

The study also noted that daylight savings is not the only culprit -- the economy may contribute, too.

"In the push for high productivity, managers and organisations may cut into the sleep of employees by requiring longer work hours," said researchers, as quoted in the press release. "This may promote vicious cycles of lost sleep, resulting in less time spent working, which could result in more frantic pushes for extended work time."

According to the press release, the researchers suggested that managers lay off demands that infringe on workers' sleep since the results are likely counter-productive. Employers should also consider restricting worker access to sites such as YouTube or angle workers' computer monitors out so that managers and colleagues can see them. The study also suggested employers consider offering employees regular break times when personal Internet use would be permitted.

"Switch to Daylight Saving Time Leads to Cyberloafing at the Office," live.psu.edu, March 7, 2012