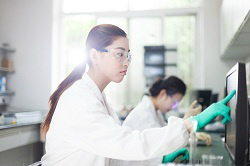 Last month, colleges across the nation produced a fresh round of science, technology, engineering and mathematics, or STEM, graduates. As they hang their gowns and tassels, many of these grads are embarking on their next big challenge: Finding jobs. A new report from Forbes provides some insight into the most promising cities for these future professionals, even amidst conflicting reports about just how in-demand they really are -- if at all.

Forbes, in conjunction with the job search site Indeed.com, reviewed all job postings for STEM professionals, as defined by the U.S. Department of Labor's O*Net OnLine, that offer a salary of at least $50,000 per year. The publication then compiled a list highlighting which cities have the most STEM openings right now. Washington D.C. snagged the top spot, followed by San Jose and San Francisco, Calif. Last year's front-runner, New York City, fell to fourth this year, and Boston ranked fifth. Indeed Director of Recruiting Mark Steinerd suggests the list serves as an example of just how in-demand these professionals are, and how important it is for colleges to keep up with the trend.

"Across the U.S., universities and even high school educators, are realizing both the opportunity created by and the importance of STEM jobs," Steinerd told Forbes. "As a result, the amount of education offered and encouraged within these areas is increasing and we will see this trend grow in coming years."

Steinerd's sentiment echoes that of a report published by the Government Accountability Office last month that found that both the number of STEM degrees awarded and the number of STEM-related jobs have increased significantly over the last decade. According to the report, the share of STEM degrees awarded grew by 55 percent, or 1.35 million, between 2002 and 2012. The number of non-STEM degrees, by contrast, grew 37 percent over the same period. STEM occupations also saw more wage growth and lower unemployment than non-STEM jobs.

As Inquisitr points out, however, the issue of whether STEM professionals are really in demand is not as cut-and-dry as one might think. In fact, another analysis published last month -- this time by the Center for Immigration Studies -- goes so far as to call the STEM work shortage a "myth." Using U.S. Census Bureau data, researchers found that though there were a total of 5.3 million STEM careers in 2012, there were 12.1 million STEM degree holders. Only one-third of Americans with undergraduate STEM degrees actually work in STEM.

Controversy aside, the Armed Forces Communications and Electronics Association reports that the U.S. government in general, and the White House specifically, consider producing more STEM graduates a key economic goal.

"(The) educational system is not producing enough STEM graduates to fill the jobs available in STEM occupations or in the increasing number of jobs in other fields that may require STEM competencies (such as analytical skills)," read a recent letter from GAO investigators to members of the House of Representatives' Committee on Education and the Workforce, as reported by the AFCEA. "The current administration maintains that a strong educational pipeline creating future STEM workers is important to ensure that the United States remains competitive with other highly technological nations."

"Is There a STEM Worker Shortage?" cis.org, May, 2014, Karen Zeigler, Steven A. Camarota, http://cis.org/no-stem-shortage

"SCIENCE, TECHNOLOGY, ENGINEERING, AND MATHEMATICS EDUCATION: Assessing the Relationship between Education and the Workforce," May, 2014, http://www.gao.gov/assets/670/663079.pdf

"STEM Worker Shortage Is A Myth, According To New Study," inquisitr.com, June 28, 2014, http://www.inquisitr.com/1324019/stem-worker-shortage-is-a-myth-according-to-new-study/