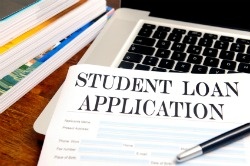 Under the debt deal that President Obama signed Tuesday afternoon, student loan subsidies took a hit, forcing some students to owe more on their loans while in school.

According to USA Today, Congress eliminated subsidies on loans for graduate students in order to preserve the maximum Pell Grant of $5,550. Though good news for low-income undergraduates, the bill puts greater financial burden on grad students who, starting July 1, 2012, will begin accruing interest on their loans while in school. Currently, the government pays the monthly interest on a loan while the student is still in school as well as the six months after graduation. Doctoral students, medical school students, law students and other long-term graduate program students benefit greatly from the subsidy.

While student-aid advocates are pleased that Pell Grants were saved, many acknowledged that this was not a total victory.

"Millions of low-income students will be able to stay enrolled in college as a result," said spokesperson for the National Association of Independent Colleges and Universities Tony Pals. "However, it is unfortunate that it was paid through the elimination of the in-school interest subsidy for graduate student loans. Our hope is the subsidy is eventually restored once the nation's economy and budget outlook rebound."

As reported by CNN Money, the Congressional Budget Office reported that eliminating subsidized loans will save taxpayers a total of $21.6 billion over the next ten years. For graduate students who qualify for the maximum amount of subsidized loans, however, the change will add several thousand dollars to the cost of going to school. Interest would start accruing while attending school, but students could choose to pay the interest while in school or wait to start payments until after graduating.

"With the elimination of the graduate interest subsidy, it is also clear that graduate and professional school students will be hard-hit in terms of their total indebtedness," said Justin Draeger, president of the National Association of Student Financial Aid Administrators.

Most of the savings--$17 billion--will go towards Pell Grants, which leaves the program just $1.3 billion short in funding. The remaining $4.6 billion will go to deficit reduction.

According to Reuters, the bill also eliminated a special credit that student loan borrowers received for making on-time loan payments for 12 months. Borrowers, however, can still receive a discount from the Department of Education if they set up an automatic debit program to make loan repayments.

The Chronicle of Higher Education pointed out that student-aid advocates remain concerned about the future of student-aid programs.

"We're grateful for the bipartisan support of $17-billion towards Pell Grants, but the question is, What will we have to give up next to save Pell in the future?" said Cynthia A. Littlefield, director of federal relations for the Association of Jesuit Colleges and Universities.