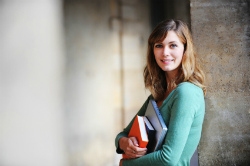 Inside Higher Ed reported Tuesday that the small, competitive and all-male Deep Springs College--a California-based institution that is part school, part cattle ranch--has decided to admit women for the first time since its 1917 founding.

"Many details remain to be decided, but the board has decided that Deep Springs should begin its second century as a co-educational institution," said President David Neidorf in a press release published on the school's official site. Deep Springs is one of the few all-male colleges remaining in the United States.

This is not the first time Deep Springs has considered admitting women: The New York Times reports that the board voted against coeducation in 1994.

According to reporting by The Chronicle of Higher Education, Neidorf contends that financial concerns drove the measure's failure 17 years ago, and that the school's finances were much more stable today. While the most recent vote cleared the board 10-2 in a secret ballot, the Chronicle reports the decision remains controversial.

In a letter quoted by the Chronicle, David Hitz, chairman of Deep Spring's board of trustees, wrote: "Some trustees who had managed both single-sex and co-ed groups felt that adding women made institutions healthier and more diverse."

"In today's world, this includes women," says Hitz. "Most trustees believe that effective training must include men and women working together.

The Chronicle reports that some alumni defended the school's all-male tradition, however, calling their time at Deep Springs "time for introspection, for maturing, for especially strong camaraderie and for reflection on the meaning of being a man."

Deep Springs College's educational approach has always been unique. According to the New York Times, the school's two-year program serves only 26 students total each year, all of whom attend tuition free. Graduates often go on to highly prestigious four-year colleges such as Oxford and Yale.

What makes Deep Springs particularly unusual, however, is its philosophy, which blends manual labor--like slaughtering cattle or bailing hay--with one or two 90-minute classes each day. The Deep Springs approach has changed very little since its inception, at least until the recent vote to admit women to its ranks.

The Chronicle notes that the school has not yet decided how it will transition to a coeducational environment, and there are no plans to increase enrollment.

"I personally believe this decision will change the Deep Springs experience a lot less than most people think," said Neidorf.

Only time will tell if he is correct: the earliest the administration foresees making the change is 2013.

"A College That Is Also a Cattle Ranch Decides to Admit Women," chronicle.com, September 19, 2011, Lacey Johnson