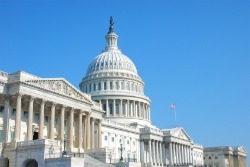 To help cover the costs of President Obama's $447 billion American Job Acts, Democrats are proposing a 5 percent surtax on those making more than $1 million annually, according to The Wall Street Journal.

Senate Democratic leader Harry Reid introduced the idea of the proposal on Wednesday to the Senate, reported Reuters.

"Democrats have listened to the American people and they have been very clear: It is time for millionaires and billionaires to pay their fair share to help this country thrive," stated Reid.

The announcement could come at a pivotal time. Support for the jobs bill seems to be wavering including among some Democrats in the Senate, noted USA Today. The proposed tax increase on the wealthy is meant to replace a current proposal for certain tax breaks. Democratic Senators, such as Joe Manchin of West Virginia and Ben Nelson of Nebraska, have expressed some doubts about the American Jobs Act, according to The Wall Street Journal.

The Democratic surtax proposal would be in place for 10 years and would affect people earning an annual income above $1 million. It would also impact capital gains and dividends. Reid said that the tax would create enough money to fully counterbalance the cost of the American Jobs Act on the federal budget.

"If Congress has a better idea that ensures that everyone pays their fair share, we're open to it," he said.

The American Jobs Act includes money to create jobs for unemployed workers by stimulating the economy in various ways. Part of the focus is on creating new jobs by modernizing schools, doing neighborhood revitalization and giving employers incentives to hire long-term unemployed workers and veterans.

Democratic leaders are hoping to bring the revised American Jobs Act before the Senate for a vote next week, reported The Wall Street Journal. At least four Senate republicans would need to vote in favor of the new change for debate to even start.

"Republicans have identified areas of common ground where we can work with the President and Democrats to create a better environment for job creation," he is reported in Reuters as saying. "That should be our focus, not desperate tax hike gimmicks floated to cover up divisions within the Democratic caucus."