Department of Education Releases Annual List of Most Expensive Colleges 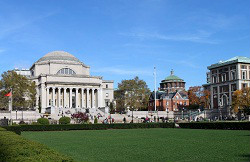 The U.S. Department of Education's College Affordability and Transparency Center (CATC) released its latest list of the nation's most expensive colleges last week, an annual ritual that, according to CBS, is meant to embarrass high-priced schools into reducing their tuition and fees. The ranking also highlights other key education trends, like which regions and school types tend to charge the most. Hint: Students on a budget may want to steer clear of many East Coast schools, and should choose art and music schools wisely.

Sticker price does not always tell the whole story, however, as CBS MoneyWatch notes schools with high sticker prices may offer better financial aid, making them a better value overall for less wealthy students. This is precisely why the CATC also highlights schools with the highest net prices. According to this list, Miami University in Ohio is the most expensive public school in the nation, with Pennsylvania State, Colorado School of Mines, the University of Pittsburgh and the University of New Hampshire rounding out the top five. Private schools with the highest net prices included a large share art schools and music conservatories. Those institutions, in order: Hult International Business School, School of the Art Institute of Chicago, Boston Conservatory, California Institute of the Arts and The New School.

Not everyone is keen on the lists. According to Inside Higher Education, some education leaders suggest such rankings do very little to reduce tuition, since the same schools tend to top them from one year to the next. A number of administrators have also called them reductive and unhelpful, if not downright misleading. Claire Wagner, spokeswoman for Miami University in Ohio, for instance, suggested that the data has more to do with state investment in education than anything else.

"It's a telling sign that the states that are not able to spend as much as others are the ones on this list," said Wagner. "I worry that somebody might stop at just that statistic, but we're trying to get the word out about outcomes, which is what we find that parents and families want to know: what are my odds of being employed or getting into graduate school."

Many of the lists' proponents remain steadfast in their support, including Education Secretary Arne Duncan, who praised them in a statement released by the U.S. Department of Education last week.

"These lists support our efforts to make college more accessible and to help families make informed decisions on the single most important investment students can make in their own futures," said Duncan.

"What are the nation's most expensive colleges?" cbsnews.com, July 1, 2014, Lynn O'Shaughnessy, http://www.cbsnews.com/news/the-nations-most-expensive-colleges/