Department Of Education Announces Race To The Top Finalists 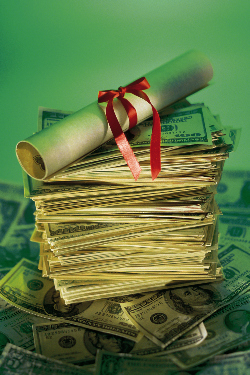 Arne Duncan, U.S. Secretary of Education, announced the finalists for the Race to the Top competition in a press release today, Tuesday.

According to The Wall Street Journal, the current finalists will need to make a formal, in-person presentation before a panel of judges in August. The winners will be announced in September and Mr. Duncan said he expects to pick 10 to 15.

The finalists were evaluated by an outside panel of judges. Each application was scored based on 19 criteria such as "willingness to open charter schools, efforts to link teacher evaluations to student achievement and dedication to transforming the lowest-performing schools". Colorado, for instance, raised their standards for teachers to earn tenure and also made it easier for teachers to lose it. Michigan and Massachusetts passed laws that will allow for state intervention in low-performance schools and districts. Each state was able to earn up to 500 points.

Race to the Top is the largest pool of federal discretionary education money in U.S. history. It is an incentive for states to raise standards and improve teaching. The contest encourages states to "promote charter schools, tie teacher evaluation to student performance and adopt rigorous learning standards".

When the competition first started last year, $4.35 billion was available. $350 million was set aside for a separate competition. Delaware and Tennessee were the first round winners and received $600 million. The remaining $3.4 billion will be shared between the 10 to 15 winners. The current 19 finalists requested $6.2 billion in total funding, reported Bloomberg Businessweek.

Teacher quality was a high priority among the finalists. The New York Times stated that the 18 states and the District of Columbia focused on the "Great Teachers and Leaders" section of the competition. "These are states that [addressed] teacher quality in terms of changing how we evaluate teachers, how we train the best and brightest and how we get rid of low-performing teachers," said Van Schoales, executive director of Education Reform Now.

The Wall Street Journal noted that the Race to the Top once had bipartisan support, but has recently encountered some opposition. The House of Representatives attempted to cut $800 million from the program. The Senate, however, rejected the proposal.

Overall, the outcomes so far have been significant. "Almost every state, with just a few exceptions, began to re-examine education policies," stated Charlie Barone, director of federal policy with Democrats for Education Reform.