Department Of Education Announces Winners For Race To The Top Competition 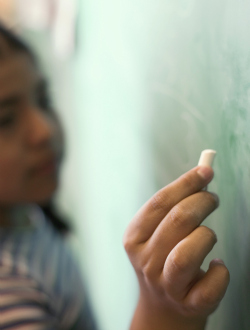 The Department of Education announced the winners for the second phase of the Race to the Top competition, reported CNN. Of the 19 finalists announced in July, nine states and the District of Columbia will receive a portion of the $3.4 billion award.

According to the Department of Education the winners were evaluated on four key areas: adopting college and career ready standards; building data systems to track student growth and success for instructional improvements; recruiting and retention of effective teachers and principals; and turning around low performing schools. "Every state that applied showed a tremendous amount of leadership and a bold commitment to education reform. The creativity and innovation in each of these applications is breathtaking," said U.S. Secretary of Education Arne Duncan.

New York and Florida won the largest amount in funding--$700 million each. Georgia, North Carolina and Ohio won $400 million; Massachusetts and Maryland will each receive $250 million; and Rhode Island, Hawaii and the District of Columbia each won $75 million. Although it did not receive the largest grant, Massachusetts earned the highest score for phase two, followed by New York and Hawaii. The New York Times stated that Hawaii had the biggest gains this time around--in the first round the state ranked 22nd. Maryland did not even participate in phase one.

According to CNN, amounts were based on student populations within each state. The winners will receive their grants in installments over the next four years, provided they meet the benchmarks outlined in their reform plans.

Some experts questioned the choice of winners, reported The New York Times. "I'm astonished that Louisiana and Colorado finished out of the money," said Frederick M. Hess, a director at the American Enterprise Institute. Both states battled for weeks to make changes in order to win the competition. "Colorado passed the single most important piece of education legislation of any state, changing their system for teacher evaluations and tenure. And Louisiana has carried out some of the nation's most amazing reform efforts, including making New Orleans a laboratory for charter schools," said Hess.

The New York Times also pointed out that Hawaii was the only winner west of the Mississippi. Critics argued that many of the reforms encouraged by Race to the Top were designed for densely populated eastern states--not schools in small rural towns or across the sparsely populated West--which usually subscribe more to the ideas that Washington considered innovative, such as charter schools.

In the press release, Secretary Duncan said he hopes that this is not the end of the program. "We had many more competitive applications than money to fund them in this round. We're very hopeful there will be a Phase 3 of Race to the Top and have requested 1.35 billion dollars in next year's budget," he said.

"Nine States and the District of Columbia Win Second Round Race to the Top Grants," ed.gov, August 24, 2010