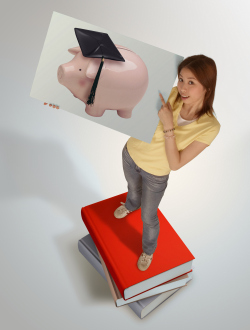 Bloomberg Businessweek reports that the U.S. Department of Education (DOE) has revamped its federal student loan program, making college more accessible. Edie Irons, a spokeswoman for The Project on Student Debt says, "The bill was the largest investment in higher education since the GI bill." In other words, this is the biggest change since 1944, when educational benefits were provided for returning World War II veterans.

According to a press release from the DOE, the most important change is the elimination of the Federal Family Education Loan (FFEL), which was President Obama's highest priority. Bloomberg Businessweek explains that federal loans will no longer originate from government paid banks, such as Sallie Mae and Nelnet. As of July 1, federal student loans will be available from the DOE through the Direct Loan Program. A more recent press release says the DOE will allocate $25 million to help loan servicers in the FFEL program retrain and redeploy the workers most affected by this provision.

Recent grads, current college students and taxpayers will greatly benefit from this transition. Removing the "middleman" will not only make the loan process smoother and more transparent for students, but it will also save the federal government $68 billion over the next 11 years, reports the DOE.

Some of that money will be funneled into the Pell Grant program, which provides grants to America's neediest students. As a result, the maximum award for the 2010-2011 academic year is $5,550, an increase of $800 since Obama took office.

Bloomberg Businessweek points out that more students will also be eligible for the Pell Grant this fall. The DOE has raised the expected family contribution, which is the minimum amount a family needs to pay towards the cost of college, to $5,273. This means that the grant is now available to roughly 617,000 more students than last year. "This is going to be a fairly substantial improvement in financial aid for some of these families," says Mark Kantrowitz, a student loan expert who runs FinAid.

Improvements were also made to the Income-Based Repayment (IBR) plan, which launched last July. The plan is a payment option for federal student loan borrowers that makes payments more affordable by basing repayment amounts on income and family size. According to the DOE, the "marriage penalty" will no longer be enforced. Instead, a couple's total federal student loan debt and total income will now be considered when calculating eligibility for IBR. The end result is that couples pay less. Also, as of July 1, the interest rate on new subsidized student loans will decrease from 5.6 percent to 4.5 percent.

U.S Secretary of Education Arne Duncan believes these changes will make college more affordable and accessible for many students. Furthermore, it brings us "one step closer to achieving the President's goal of having the highest proportion of college graduates in the world by 2020," he says.