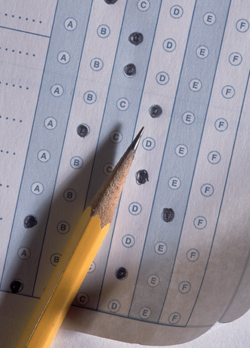 Multiple-choice standardized exams will soon be a thing of the past.

According to The Christian Science Monitor, the U.S. Department of Education awarded $330 million to 44 states and the District of Columbia to develop a new testing system that would better prepare students for college and 21st century careers as well as measure teacher performance. The new tests will align with the new Common Core Standards and will be rolled out in the 2014-15 school year.

The Los Angeles Times reported that the tests will be computer-based and will deliver harder or easier questions depending on students' responses. A higher-level test question, for example, could ask students to select information from a list of online resources to write a short research paper in response to a prompt. The goal is to develop a new test that will evaluate critical thinking, writing, researching and listening skills. Bruce Fuller, an education professor at Berkeley told The New York Times, "If these plans work out, it'll turn the current testing system upside down."

Students will also be tested several times throughout the school year, as opposed to simply taking a state test at the end of the year. Because the new tests will be computerized, teachers will be able to receive feedback much faster than before and, therefore, will be able to adjust instruction plans to cover material that needs to be taught again.

The 44 states and the District of Columbia will be split up into two groups. One group, led by Florida, is called the Partnership for Assessment of Readiness for College and Careers and was awarded $170 million. The other group, led by Washington, called itself the Smarter Balanced Assessment Consortium and received $160 million. Twelve states are participating in both groups, but will adopt one testing system before 2014.

The Los Angeles Times pointed out that some educators criticized the new tests, arguing that they would take up valuable teaching time. Secretary of Education Arne Duncan reasoned that improved tests should cut down on the overall number of tests students would need to take. The Christian Science Monitor added that Secretary Duncan argued that tests should be more connected to classroom education and activities, which would eliminate separate test-prep time. Furthermore, because university professors will help design the new tests, the system should also cut down on the need for remedial courses on college campuses.

Still, some teacher unions are hesitant about the district's plan to use test results as a way to evaluate instructors, reported The Los Angeles Times. "This is not an educational tool; this is an educational weapon," said Mat Taylor of United Teachers Los Angeles. Taylor argued that inadequate funding and lack of meaningful teacher feedback at schools were the real issues that needed to be addressed.

Benefits may not be seen immediately as the new approach has never been done before. Elliot Weinbaum, a senior education researcher at the University of Pennsylvania, recognized that there could be potential benefits in revamping the current testing system, but also said that there would be "a lot of technical challenges" to make the tests achieve all the intended complex goals.

"U.S. Asks Educators to Reinvent Student Tests, and How They Are Given," NYTimes.com, September 2, 2010, Sam Dillon