Department Of Labor Reports That Job Openings Are On The Rise 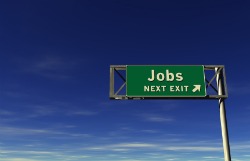 The Labor Department announced some good news for the nation's 13.5 million unemployed workers: the number of job openings is up and the ratio of unemployed seekers to job openings is at the lowest level in almost three years, reported CNN Money.

According to the Labor Department, there were 3.1 million available jobs in February, which is the largest number of job openings since September 2008. Furthermore, the combination of more job openings and a decrease in the number of people unemployed brought the ratio of unemployed job seekers to available jobs down to 4.4, an improvement from a ratio of 5.1 in January and a significant drop from a high of 6.9 in July 2009, reported The New York Times.

"Today's report was broadly positive and reflects continued improvement in the labor market," wrote Theresa Chen, an economist with Barclays Capital, as quoted by CNN Money. "We are particularly encouraged by the persistent rise in the job openings rate."

The Labor Department's report also showed that employers made more hires in February than they did in January--the number of new hires by employers in the month of February went up to 3.9 million, an increase of 138,000 from January.

In another promising sign for the labor market, the number of people who quit their jobs went up. In February, 1.9 million employees quit their job, up 254,000 from January and the highest level in two years. CNN Money noted that this is a good sign as people tend to voluntarily leave their jobs when they are able to find better positions or have confidence in the job market.

However, as MoneyRates.com pointed out, job market conditions vary greatly from state to state. So the growth in job openings may not be seen across all states and if you're looking for better opportunities, you may need to explore other locations.

According to MoneyRates.com, Illinois, Washington and Texas are among the top 10 states for making a living. Four factors were taken in to account to determine which states were the best for making a living: average state wages, state unemployment rate, state tax rate and state cost of living. MoneyRates.com then calculated an adjusted-average income, which is the average income adjusted for your chances of finding a job, how much you'd lose to state taxes and how much purchasing power you'd have based on a state's cost of living.

So if you're not feeling the effects of the increase in job openings where you are now, you might want to see if you can improve your chances elsewhere.