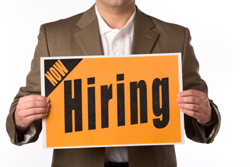 According to The Hill, the Labor Department's Job Openings and Labor Turnover survey showed that the total number of U.S. job openings increased slightly in July.

Bloomberg reported the survey showed that total firings, which excluded retirements and voluntary separations, fell to 2.12 million. The layoff and discharge rate remained at a seven-month high of 1.6 percent, announced Reuters.

Unfortunately, private hiring has shown few signs of picking up. Although the August jobs report showed that private payrolls added 67,000 jobs, many private sector businesses have stalled. "We'll see a very gradual reduction in the unemployment rate," said Ken Mayland, president of ClearView Economics LLC. "Private hiring is still on the anemic side."

According to Bloomberg, President Obama plans to propose expanding tax cuts for businesses and boosting federal spending on the national transportation system to help strengthen the economy. On September 6, the President began some of the initiatives by calling for $50 billion to start repairing roads, railways and runways and to modernize the air-traffic control system.

Some hiring is also expected as export-oriented companies prepare to handle an increase in sales in developing markets. Illinois-based Caterpillar Inc., the world's leading manufacturer of construction and mining equipment, for example, said last month that it may add as many as 9,000 workers worldwide.

However, The Hill pointed out that until job creation significantly picks up, consumer spending and economic recovery will be slow.