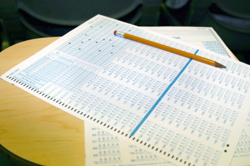 DePaul University announced that it would adopt a "test-optional" admissions policy, making it the largest private nonprofit university to not require applicants to submit any standardized test for admission.

According to DeBlogs, applicants for fall 2012 can choose whether to submit an SAT or ACT score; however, if an applicant chooses not to, he or she will be asked to submit responses to a few short essay questions. This shift reflects the university's commitment to a "holistic review" of every application it receives.

Alternative admissions requirements are nothing new to DePaul. According to the school's website, DePaul used open-ended essays in their admission process for three years before joining the Common Application last year. These "non-cognitive variables" were designed to elicit other predictors of success in college. The Chronicle of Higher Education pointed out that these essay questions were based on the research of William E. Sedlacek at the University of Maryland. Sedlacek identified eight predictors of student success in college, including leadership experience, community service and knowledge in a particular field.

While SAT and ACT scores are solid predictors of success, many felt that when combined with high school transcripts and GPA, they showed little additional insight.

"It's just double-counting, or confirming information we already have," explained Jon Boeckenstedt, associate vice president for enrollment management. Furthermore, many questioned the fairness of standardized tests since research has shown that they are strongly correlated with income. With such a diverse student body, many feared that standardized tests were limiting access. Boeckenstedt and his colleagues argued that non-traditional requirements were better predictors of success, particularly among low-income and minority students. Furthermore, the use of open-ended essays will allow admissions officials to better select applicants who will succeed and graduate.

As the school's website stated, "...four years of performance and learning in high school are far more important than performance on a four-hour test. We view student capabilities as more complex than those measured by standardized tests..."

However, DePaul emphasized that it does not dismiss the value of standardized tests and expects that many students will still submit an SAT or ACT score when applying. Boeckenstedt told The Chronicle of Higher Education that he hopes the new policy will show students that high school performance is more important than performance on one test.

"Test scores are valuable for some things," he said. "But the focus and obsession we have about them as a country is a little bit misplaced, if not a lot misplaced."