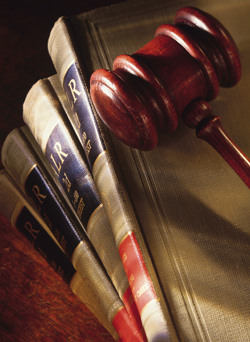 On August 5 a recent law school graduate announced a hunger strike to push law schools to release more accurate salary and employment data for recent grads. Hunger striker "Ethan Haines" created a huge buzz within the blogosphere and garnered support from a number of unemployed law school graduates who felt disillusioned by schools that boasted lucrative employment prospects. On Tuesday, Haines once again created a buzz, but for a different reason--USA Today reported that Ethan Haines is actually Zenovia Evans.

According to The National Law Journal, Evans is a 2009 graduate of Thomas M. Cooley Law School and decided to reveal her real name "to dispel criticism that her hunger strike is a hoax". Evans, a 28-year-old African American woman, used an alias that led people to believe she was a white male. "That's primarily what the industry looks like right now. I wanted people to say 'Hey, that's my story too,'" she said.

Inside Higher Ed added that while "Haines" described himself as unemployed, Evans is arguably employed as an independent contractor for a Colorado law firm. In an interview, Evans told Inside Higher Ed that her true identity was not what mattered most. She referred to herself as a "class representative" who was speaking out on behalf of other frustrated students who, for one reason or another, could not vocalize their concerns.

Evans has already received criticism for being dishonest and her former supporters are now calling her part of the problem. Because many feel the solution to the law school employment problem is to stop encouraging people to go to law school, Evans' former supporters are outraged because Evans has self-published books that help undergraduates find ways to go to law school. Furthermore, according to The National Law Journal, some have called Evans's hunger strike a means of promoting her own book.

Evans told Inside Higher Ed that her new critics do not understand her goals. "I don't think law school is a scam. I think it's a great degree and it's done amazing things for me," she said. However, she does think that law schools need improved career services and should meet the standards of transparency developed by Law School Transparency, a non-profit founded by two Vanderbilt law students that argued that law schools mislead prospective students with overinflated employment opportunities. Advocates for reform argued that law schools use unscientific information--such as alumni success stories--instead of providing accurate detailed reports on the employment statistics of recent grads.

USA Today pointed out that among 2009 law school graduates, 88 percent were employed, a decrease from 92 percent in 2007. The non-profit National Association for Law Placement added that graduates are more likely than in previous years to take part-time or temp jobs or jobs that do not even require a law degree. Most of this information, Evans said, is withheld by law schools.

While more and more graduates fault law schools for being deceptive, some think the anger is misplaced. Kelsey May, a 2010 University of Tulsa law school graduate, said, "There should be some level of (personal) responsibility."

Despite her $150,000 debt, Evans told The National Law Journal, "I'm not a law school hater... I'm just trying to get a faulty system working."