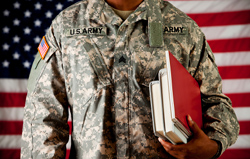 According to a report released by the American Council on Education, although veterans encountered a number of challenges during the first year of Post-9/11 GI Bill implementation, they were still satisfied with their overall experience.

Data was based on surveys from 230 veterans and 22 student focus groups across 13 institutions, reported Inside Higher Ed. Focus groups were conducted in Arizona, Ohio and Virginia, which are all states that have a large veteran population.

As The Chronicle of Higher Education pointed out, veterans and institutions cited delays in receiving payments as the biggest problem, particularly for veterans who depended on the stipends to pay rent. For some veterans, the late tuition payments--which many reported were three months late--caused them to be dropped from classes.

Jennifer L. Steele, one of the authors of the report, attributed to the delays to problems with infrastructure changes, which created a backlog at the Department of Veterans Affairs. Steele, however, told reporters that the problem will eventually be resolved. "We think this is going to be a problem that is gradually going to fix itself," she said in a conference call.

Another complaint veterans had was over the lack of an online accounting system. Inside Higher Ed noted that because money was directly deposited to accounts without a description, many veterans had no idea what the payments were actually for. Furthermore, some veterans were overpaid and ended up owing the VA money. "I don't know if that's [for] housing, if it's [for] books, just an account error or what," said one student in a focus group. "So, if I get this money, it's there to spend on whatever. You're just somewhat fearful that you are going to get a letter in the mail that says, 'Hey! You owe us this much money, because we overpaid you.'"

According to The Chronicle of Higher Education, veterans also experienced problems when trying to transfer military education credits to their institution. Less than half of all respondents said they were satisfied with credit transfer policies.

However, despite these barriers, veterans seemed pleased with the program overall. In fact, after receiving positive feedback from both veterans and institutions, the report called the Post-9/11 bill the "most-generous education benefit for veterans since the original GI Bill".

Inside Higher Ed noted that the survey also examined veterans' experiences when transitioning from military life to student life. While veterans dealt with some of the same struggles typical college students faced, such as balancing academic responsibilities with day-to-day life, many reported having difficulties that were specific to their veteran status. For example, about 10 percent of focus group participants had service-related injuries, such as bodily injuries and post-traumatic stress disorder.

Some veterans reported having trouble transitioning from the clearly defined environment of the military to the less structured expectations of the academic world. "Getting here, the standard is so high," said one student. "That was where I really struggled. I thought I was really strong in some areas, but when I came here I found it was like comparing apples to oranges... [In the military] the expectations are clear; it is very structured, but here, every professor does something different."