Despite The Danger College Students Still Use Mobile Apps While Driving 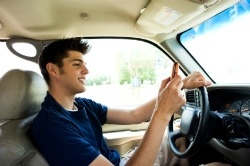 Forget talking or even texting on the phone while driving. New research shows that college students use mobile applications while driving, even though they are aware of how dangerous it can be.

According to UAB News, a University of Alabama at Birmingham survey showed that 10 percent of students admitted that they use mobile apps "often", "almost always" or "always" while driving. Thirty five percent of college students "sometimes" use mobile phone applications while driving. The findings are based on a survey of 93 UAB students who own a smartphone and use it to access Internet-based applications at least four times a week. Though the participants are not a random sample, David Schwebel, Ph.D., director of the UAB Youth Safety Lab, said the results are concerning.

"Driving a car is an incredibly complex task for humans to complete safely... A driver using his or her smartphone is clearly distracted, both visually and cognitively, and really should not be driving," said Schwebel.

Reuters reported that these students were fully aware of how dangerous mobile app use can be when behind the wheel; yet, the consequences did not deter their use.

"What really stood out was the number of participants who verbally reported understanding that using mobile Internet while driving was dangerous, but continued to do it," said Lauren McCartney, a UAB student who worked on the study.

Interestingly, Schwebel noted that students usually do not use the apps for urgent business or necessity (for example, Google Maps for directions). Instead, it is purely for socializing and entertainment. McCartney added that some students want to stay up-to-date, so they check their mobile apps on an hourly basis.

However, even more astonishing was that even after experiencing a crash while using a mobile app behind the wheel, students still continued to do use them. Ten of the students surveyed reported that they had crashes directly related to distracted driving in the past five years. Three students had two accidents. And the problem is only expected to get worse. According to DailyFinance, research has shown that 74.6 million people in the U.S. owned a smartphone during the three months ending in April 2011, which is up 13 percent from the three-month period ending January 2011.

"...Something needs to be done because in psychological terms, Internet use involves substantial cognitive and visual distraction that exceeds talking or texting, making it much more dangerous," said McCartney to UAB News.

Researchers pointed out that 33 states currently ban text messaging while driving, but no state specifically bans the use of Internet-based mobile phone applications.

"Distracting Young Drivers? There Are Lots of Apps for That," dailyfinance.com, June 28, 2011, Douglas McIntyre