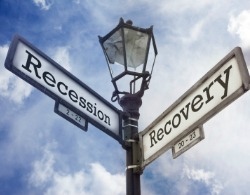 A disappointing August jobs report has illustrated the economic stakes of the upcoming presidential election.

This sobering news prompted the president, mere hours after giving an eloquent speech at the Democratic National Convention, to publicly explain his stance on the issue. The New York Times reports that the president attributed the lack of jobs to Congressional Republicans’ refusal to pass his jobs bill, which he proposed to Congress back in 2011. “If Republicans are serious about getting rid of joblessness, they can create one million new jobs if Congress passes the jobs plan I sent them,” he stated at a campaign rally in New Hampshire. He also maintains an optimistic tone, citing the fact that, “after losing around 800,000 jobs a month when [he] took office, businesses added private-sector jobs for the 30th month in a row.”

The disappointing job market numbers in August have stirred discussion of the Federal Reserve's potential involvement in an economic recovery plan. According to The Wall Street Journal, Chairman of the Fed Ben Bernanke described the job market situation as “grave” at an economists’ meeting last week. He also mentioned such options as a bond-buying program at this meeting, implying that he wishes the central bank to actively participate in the recovery of the economy.

The Republican Party and Mitt Romney have used the Labor Department’s report as fresh fodder for a renewed attack on Obama’s management of the country’s economy, writes The New York Times. “There’s almost nothing the president has done in the past three and a half, four years that gives the American people confidence that he knows what he’s doing when it comes to jobs and the economy,” Romney said, “[H]e made a lot of promises four years ago. Can you think of any of those promises that was met? I mean, he was going to create jobs. We haven’t. Lower unemployment? He hasn’t. Rising take home pay? It’s gone down.”

These assertions connect to of one of the primary arguments Romney made in his speech at the GOP National Convention in late August, which was that his background as a seasoned businessman gives him the necessary knowledge to help America’s economy recover; knowledge he claims Obama lacks. In this speech, Romney stated his plans to “champion SMALL businesses, America’s engine of job growth” by “reducing taxes on business” and “modernizing the regulations that hurt small business the most,” and argued that Obama’s plan to tax small businesses would only damage America’s economy further.

For his part, the president has countered with arguments that the Republican Party sees tax cuts as the catch-all solution to the country’s economic problems. In his speech on Thursday, Obama stated, “Over and over, we have been told by our opponents that bigger tax cuts and fewer regulations are the only way; that since government can’t do everything, it should do almost nothing.” He also emphasized his plans to raise taxes on the wealthy and invest further in American education as a long-term strategy to support the economy. “[N]o child should have her dreams deferred because of a crowded classroom or a crumbling school. No family should have to set aside a college acceptance letter because they don’t have the money,” he declared, “[T]ogether, I promise you, we can out-educate and out-compete any nation on Earth.”