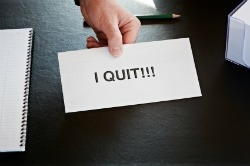 By posting a video of his marching band-backed resignation on YouTube, 24-year-old hotel worker Joey DeFrancesco became both hero and Internet celebrity.

"Joey is the hero of all downtrodden workers because he is the embodiment of 'take this job and shove it.' He's living out the fantasies of countless workers who also hate their bosses," Allison Hemming, chief executive officer of the Hired Guns, a digital marketing and talent agency, told CNN.

The video has become an Internet sensation, with nearly 2 million views. In the video, DeFrancesco's bandmates from the What Cheer? Brigade--he plays trumpet in the band--accompanied him as he turned in a letter of resignation to his boss at the Renaissance Providence Downtown Hotel in Rhode Island. The band began playing and chanting "Joey quit," as DeFrancesco triumphantly walked out of the hotel, his arms held high like a winning prizefighter.

"I hated them, and they hated me," DeFrancesco told The Huffington Post, referring to hotel management "It was this big drawn-out war we were having with management... I knew I had to get one last shot at them."

DeFrancesco worked at the hotel for 3.5 years while attending college full-time, according to Yahoo!.

But as CNN reported, the video is more than just a grandiose stunt--it demonstrated how social media has changed the relationship between companies and their workers.

"Managers should remember that if you're terrible to your people while they are working for you, your formerly silent former employees will have a platform to out you in a potentially very public way," Hemming explained. "And that sentiment can affect your business, too."

It also showed how social media has put more power in employees' hands.

"Rather than having the situation defined for them, people are trying to shape the conversation on their own," Anne Kreamer, author of "It's Always Personal: Emotions in the New Workplace," told CNN. "For all we know, Joey was going to get fired the next day, but he turned it around."

Although DeFrancesco's video is from August, it continues to resonate with many people as the jobless rate in the United States remains at 9.1 percent, unemployment claims continue to hover above 400,000 and Occupy Wall Street is gaining traction. DeFrancesco's stunt personifies the anger and discontent many feel, making him an Internet folk hero, Kreamer said.

"There's a kind of confluence of events that's forcing people's anger and dissatisfaction to the surface," Kreamer added. "Everyone's been taking it on the chin for years because of the recession, but now they're exhausted and want change. Joey's approach is unique in saying, 'I'm going to have some fun with this.'"