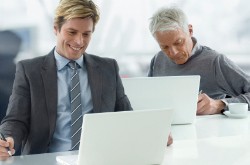 Thinking of going back to school? That might be a good idea, but for a reason you probably were not thinking of--a study published in the journal Brain, Behavior, and Immunity indicates that people with less academic education, may age more quickly than those with higher levels of education.

According to Medical News Today, researchers took blood samples from 450 volunteers--healthy women and men aged between 53 and 76--from the "Whitehall II" study, an ongoing study that started in 1985 to investigate links between socioeconomic status and health. They hypothesized that the length of telomere sections would be more related to education than to socioeconomic circumstances. Telomeres are the "caps" at the ends of chromosomes that guard against damage and the loss of cell functions. Shorter telomeres are thought to be an indicator of faster ageing.

Reuters reported that study participants were separated into four groups based on education level--those with no education, those who left formal education around the age of 16, those who left around 18, and those who earned a degree from a higher education institution.

Results showed that people with less education had shorter telomeres, suggesting that they may be ageing faster. According to Medical News Today, even after adjusting for confounding factors, researchers still found that participants with less education had shorter telomeres, which indicates that socioeconomic circumstances do not affect telomere length, as was previously thought.

In other words, "Education is a marker of social class that people acquire early in life, and our research suggests that it is long-term exposure to the conditions of lower status that promotes accelerated cellular ageing," said Professor Andrew Steptoe, lead researcher on the study, as quoted by BBC News.

Researchers speculated that education helps people make better decisions that can positively affect their long term health. Furthermore, they also argued that those with higher education levels may experience less stress or may be better equipped with coping skills, such as problem solving, that help them better deal with the stresses of life, which in turn can reduce biological stress on their bodies.

According to BBC News, the researchers for this study were primarily from University College London. However, they also collaborated with experts at the University of Wales Institute, Cardiff and the University of California San Francisco.