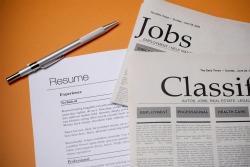 Conventional wisdom suggests that employers tend to favor good-looking people during a hiring process. A new study, however, reveals that while handsome men have a higher chance of landing an interview, beautiful women may have a harder time finding a job.

The study "Are Good-Looking People More Employable," conducted by economists at Ben-Gurion University of the Negev in Israel, sent 5,312 resumes to more than 2,600 companies that had advertised job postings, The New York Times reported. Two nearly identical applications were sent to employers, the main difference being that one resume included a photo of the candidate and the other did not. Some photos displayed an attractive man or woman while others showed a more plain-looking man or woman. It is important to note, the researchers emphasized, that it is a typical practice in Israel to append a photo of oneself when applying for work.

Based on the report's findings, an attractive man has to submit five resumes before landing an interview, whereas a plain-looking man must send 11 applications with a photo to get called back.

By contrast, employers tended to favor female applicants who did not include a picture of themselves: women who did not send photos were called back 16.6 percent of the time. Applications with attached photos of plain-looking women had callback rates of 13.6 percent, compared to 12.8 percent for resumes that included photos of attractive women.

"This really goes against what I would assume about the hiring process," Ayelet Hazie, public relations manager at Manpower Israel, told The Media Line. "The results are very interesting and not at all expected."

According to The Jerusalem Post, the economists hypothesized that the apparent bias in hiring practices was a direct reflection of who was conducting the hiring at the firms. At almost every company, the person responsible for screening applications was a young woman, from the ages of 23 to 34, and typically single.

Callback rates, the researchers concluded, were likely influenced by the screener's jealousy "when confronted with a young, attractive competitor in the workplace," The New York Times reported. In addition, a survey of employers revealed that screeners responded positively to male candidates who attached a photo with their resume, interpreting it as a demonstration of confidence. When a woman included a photo, employers believed the woman was "attempting to market herself via appearance."