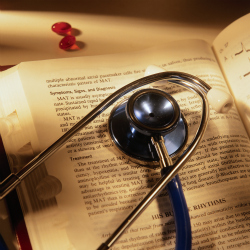 A recent study published in the Annals of Internal Medicine reveals "evidence of plagiarism" in 5.2 percent of medical residency personal essays.

The study was launched after Dr. Scott Segal and Dr. Brian Gelfand came across two personal essays for Brigham and Women's Hospital with an identical paragraph, reported The Boston Globe. The authors used software called Turnitin, which Inside Higher Ed pointed out is currently used at 9,000 high schools and colleges, to examine 5,000 personal statements submitted between September 2005 and March 2007 to the five largest residency programs at Brigham and Women's Hospital--internal medicine, anesthesiology, general surgery, obstetrics and gynecology, and emergency medicine. Plagiarism, in this case, was defined as text with more than 10 percent overlap with other materials. The Wall Street Journal added that "other materials" referred to "'web pages, printed resources and previously submitted essays'".

According to The Boston Globe, the authors discovered that 1 in 20 residency application essays contained evidence of plagiarism. Plagiarism mostly occurred among students outside of the U.S. and Canada. Among non-US citizens, 14 percent were caught plagiarizing. Two percent of U.S. students were guilty of it. Additionally, The Wall Street Journal reported that non-US citizens "who went to med school outside the U.S. and Canada, who had a previous residency or fellowship, and who lacked research experience or other credentials, had low medical licensing board scores and who weren't members of a medical honor society" were more likely to have plagiarized text within their essays. However, there was still some evidence of plagiarism across the board.

Most examples of plagiarism included accounts of patients or family members, stated The Boston Globe. "I think that is the part that bothered me the most," said Segal. "You read this heartfelt anecdote about a person's illness or a family member's illness or a particular patient and it turns out not to be their experience at all."

Because of the findings, Dr. Maxine Papadakis and Dr. David Wofsy of the University of California, San Francisco, School of Medicine, have begun questioning the usefulness of personal statements. The Wall Street Journal pointed out that Papadakis and Wofsy also criticized the trend toward using professional essay services. While these services may not be examples of plagiarism, they do misrepresent an applicant's capabilities. Furthermore, The Boston Globe quoted Papadakis and Wofsy saying, "'If the integrity of the personal statement is increasingly polluted by Internet samples or hired consultants, perhaps the personal statement is ill-suited to this era and best left to history.'"

However, despite its shortcomings, some still find the personal essay valuable. "It gives insights into their character, beyond the numbers. I'd hate to lose that," reasoned Segal.