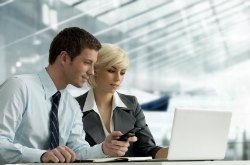 Despite the slow economic recovery (some may argue nonexistent), single people appear to be finding employment faster than those who are married.

As reported by CNNMoney, data from the Labor Department shows that single people have been more successful at recouping lost jobs. Single men and women lost approximately five million jobs during the economic downturn and have since recovered 90 percent of them. Married people, however, have only regained about 22 percent of the six million jobs they lost.

According to CNNMoney, this could be due to several factors. One factor could be timing as single people had an early start to their recovery--singles began recovering jobs in 2009, whereas married people started regaining jobs only in 2011.

"It may be that among many married couples, it's less crucial that both work," reasoned University of Chicago Economist Bruce Meyer in CNNMoney. "If one is laid off and the other is working, the unemployed spouse can afford to take a while to look for a job."

Another factor seems to be age. As CNNMoney pointed out, individuals under the age of 35 have landed more jobs than those 35 to 55 years old. And younger workers are more likely to be single. Furthermore, young people are more flexible when it comes to employment. They are typically more likely to accept lower wages or relocate for a job opportunity, even if the job is unappealing. Indeed, a Pew Research Center report released in February found that 49 percent of young adults ages 18 to 34 said they had taken a job they did not want just so they could pay the bills.

Interestingly, however, CNNMoney also pointed out that the faster recovery may be somewhat misleading as the single population is growing twice as fast as the married population. In fact, Pew Research Center data suggests that there will soon be more single adults than married couples in the U.S. for the first time on record.

"At first glance, it looks like singles are doing much better. They are getting more jobs," said Robert Lerman, an American University economist, to CNNMoney. "But on closer inspection, the real issue is there simply are a lot more single people."

Not all single people are doing so well, however. As The Wall Street Journal reported in May, there are 1.2 million unemployed single mothers; that accounts for more than half of the total number of unemployed moms, and married mothers are almost double the population of single moms. In 2011, the unemployment rate for single mothers was 15 percent. Married mothers, on the other hand, had an unemployment rate of 6 percent.