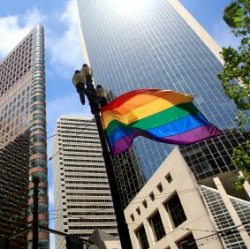 Last month, the U.S. Supreme Court struck down a key provision of the Defense of Marriage Act, or DOMA, extending more than a thousand federal benefits to couples in same-sex marriages -- including a number of workplace benefits. Discerning how to handle these changes should be fairly simple in states that recognize same-sex marriage, but according to Salon, the transition could be more complex in states that do not.

NPR reports that an estimated 225,000 Americans are in legally recognized same-sex marriages. The DOMA decision makes them eligible for a number of federal workplace benefits, like those that deal with health care, retirement and family leave. According to David Codell, legal director of UCLA's Williams Institute, it could be a difficult transition for many companies -- but that is to be expected. "Discrimination is messy and it takes a lot of work to clean up," said Codell. "The demise of DOMA is going to raise a lot of practical questions for employers."

Among them: How to handle benefits for same-sex couples legally married in one state, but living in another that does not recognize the union. Lawyers.com reports that 37 states do not perform gay marriages, and have no obligation to recognize those performed elsewhere. It is unclear whether federal benefits affected by the DOMA decision are portable.

"Because only about a dozen states recognize same-sex marriages and section 2 of DOMA, which allows states to refuse to recognize same-sex marriages performed under the laws of other states, remains intact, it's possible that same-sex married couples could gain or lose benefits depending on where they live," Linda Panszczyk, senior legal analyst at Wolters Kluwer, told Lawyers.com. According to NPR, the White House said it intends to define marriage in whatever way is most inclusive, but until new regulations have been written, questions remain.

The expansion of benefits is not the only way DOMA could impact the workplace: Chris Crespo, inclusiveness director at Ernst & Young, said immigration policy changes now allow gay spouses to be recognized just as straight spouses have been. That means more workers from other countries might now accept positions in the United States.

"We have a lot of mobility that happens domestically and internationally," Crespo told NPR. "I had one person who called me excited about the decision because he could now bring his married spouse into this country and not have to decide between spending time with his aging parents or his spouse."

None of these changes are likely to happen overnight, however. In the meantime, companies must figure out how to navigate shifting policies and communicate them to their workers. "We need to draft a communication and tell our employees what we're doing," Kate Duchene of the consulting firm Resources Global Professionals told NPR. She added that HR training is probably in order, too.