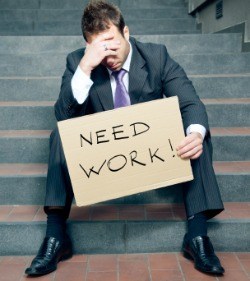 When sequestration policy went into effect July 1, emergency federal unemployment benefits for the long-term jobless were cut, affecting millions of Americans. Also, a number of states scaled back their unemployment benefits to lows not witnessed since the federal government established the program in 1935, USA Today reported.

"These are historic and disturbing cuts," said Mike Leachman with the Center on Budget and Policy Priorities. "When the next recession hits, the unemployment system of the country is going to be significantly less effective. And it means the next recession will be deeper than it otherwise would have been."

Last week, North Carolina halted benefits for tens of thousands of residents and reduced the time jobless people can collect such assistance. This was in large part because the state still owes $2.5 billion on a loan from the federal government, which it used to buoy its unemployment assistance program. In addition, North Carolina is the first state to end its participation in the federal emergency unemployment benefits program, which kicks in when an unemployed person has exhausted all of his or her state benefits. Consequently, about 80,000 North Carolinans lost their supplemental federal monies.

Georgia has also made changes to its unemployment plan; its jobless benefits now run out after 18 weeks compared to its previous 26-week limit. Five other states have lowered their maximums to 19 or 20 weeks.

According to CNBC, some states have also cut their payment benefit amounts. New Jersey and Maryland, for example, cut benefits the most, by 22.2 percent, followed by Montana (19.6 percent), Connecticut (19.2 percent), and Arizona and Illinois (16.8 percent). Texas, which has an unemployment rate below the national average at 6.5 percent, trimmed 10.2 percent.

Currently, federal emergency unemployment benefits are helping to lessen the impact of the state's new cuts. The duration of that aid is based on each state's jobless rate; in those with the lowest, 14 weeks is the standard. However, the program is set to expire at year's end and Congress may not opt to extend it.

In addition, as of July 1, under sequestration rules, the federal government cut overall monies for the long-term unemployed by about $2.4 billion, approximately a 15 percent reduction, U.S. News & World Report explained. The average weekly benefit of $289 dropped by $43 due to sequestration. However, some states experienced even more drastic reductions; for example, unemployment compensation fell 22.2 percent in New Jersey, amounting to about an $85 reduction from the typical $382 amount.

Against a backdrop of diminished unemployment benefits, long-term joblessness persists, USA Today noted. Federal numbers show nearly one-third (4.3 million) of the nation's 11.8 million jobless have been unemployed for 27 weeks or longer. While down from the high of 6.7 million in 2010, the number remains well above the 1.1 million unemployed during the pre-recession period in the mid-2000s, according to U.S. News & World Report.